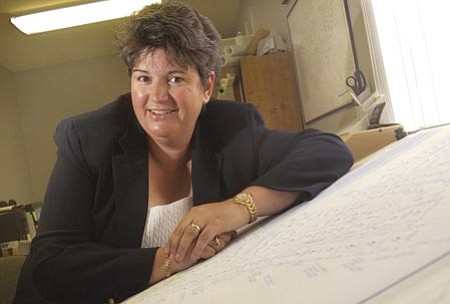 The charges apparently stem from checks that Townsend's company produced during business in the Prescott area. For approximately the past two years, she apparently has been in the home building business in hurricane-ravaged portions of Mississippi.

However, alleged victims have received notices from the County Attorney's Office that list the charges and state that Townsend's first court date is scheduled for Tuesday.

Back in December 2007, McGrane told The Daily Courier that his office was investigating allegations that Townsend's company produced bad checks that could total more than $100,000.

He also said back in 2007 that if Townsend's company did that and she knew the money was not available, she could face jail time.

Townsend told The Daily Courier in December 2007 that she never personally wrote any bad checks.

Current attempts to find ways to reach Townsend for comment were unsuccessful.

The alleged victims include small local businesses such as Bennett Oil of Prescott and Donaldson Trucking of Dewey.

"I was happy when I got the letter" from the County Attorney's Office, Donaldson Trucking owner Jeff Donaldson said. "She took me for more than $30,000. For a small company like us, it's hard to recoup. I lost a lot of nights' sleep over it."

"She made us all look like a bunch of thieves because we couldn't pay our bills," Donaldson said.

"She always thought she was above the law," Nelson said.

Nelson's brother, Arizona Secretary of State Ken Bennett, at one time endorsed Townsend in her 2006 bid to win the state Senate seat he was vacating because of term limits.

Townsend later dropped out of the race.

County Republican leaders told The Daily Courier they advised Townsend to drop out when they found out she was paying then-County Assessor Victor Hambrick $80,000 per year to work for her for 1.5 years while he also served as county assessor in 2005 and 2006.

Arizona Registrar of Contractors officials have stated in the past that they were investigating real estate transactions between Townsend and Hambrick, but they have not announced a conclusion to that case.