Climbers clamor for return of rock 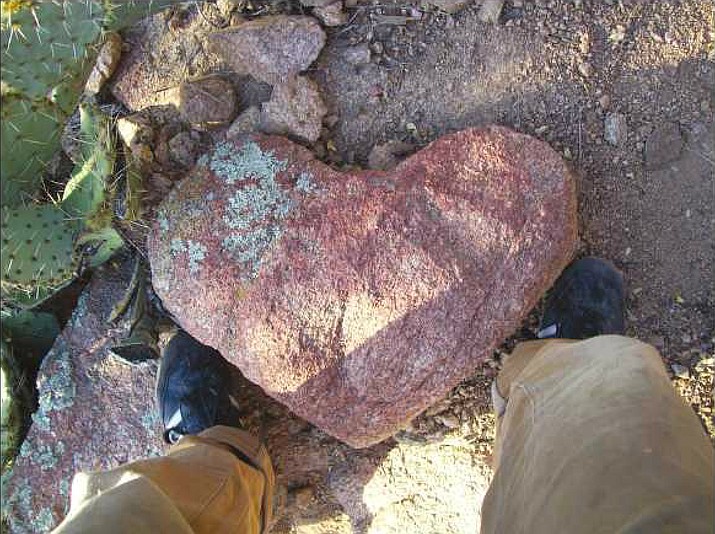 Local rock climbers hope the person who took this large heart-shaped rock from the top of Granite Mountain returns it to the Prescott National Forest, so climbers can continue their long-standing good-luck rituals. (Kyle Kent/Courtesy photo)

Local rock climbers are scrambling for the return of a large heart-shaped rock from the top of Granite Mountain just west of Prescott.

Someone illegally carted the red-hued rock about two miles down the wilderness trail over the weekend. Long-time climbers estimated it weighs 50-80 pounds and measures 16-18 inches across.

For more than a decade, climbers have made it a ritual to stop at the unique rock before and after their climb on the face of Granite Mountain.

"Somebody stole the heart of Granite Mountain," said Jason Williams, a Prescott National Forest wilderness ranger and climber. "We haven't talked about moving past it. We just want it back.

"You don't realize how important things are until they're gone."

The rock disappeared Saturday or Sunday, and climbers already are offering a $250 reward for its return, no questions asked, Williams said.

While it technically is illegal to remove objects from national forests without a permit unless someone is doing recreational gold panning, the Forest Service isn't interested in prosecuting anyone for this theft, Williams said.

The rock sat along a well-hidden primitive social trail that climbers use to reach the cliff face of Granite Mountain in the Granite Mountain Wilderness Area. It is one of the most popular climbing spots in Arizona.

Steve Munsell, the Adventure Program coordinator for Prescott College who has been climbing Granite for three decades, said he has been participating in the heart rock ritual for about 15 years.

"You stop and stand on it and kind of declare your intentions for the day and clear your mind...and say a prayer that you're trying to have a safe day," Munsell said. "On the way down, you give thanks for the incredible day you've had.

"That's really been a ritual that local climbers would observe."

On Thursday - Munsell's first time climbing Granite Mountain since the rock disappeared - he was in a heightened state of awareness because of the missing rock.

His class experienced numerous challenges on the cliff face Thursday, including dropped equipment and several instances of tangled rope. He had to wonder if the missing rock had anything to do with it.

"We sort of got our center by standing on this rock, and now it's gone," he said.

He also had to wonder if the person who took the rock was facing any bad luck.

"I think that would be unfortunate, but it's not a rock I'd want to be in possession of," Munsell said.