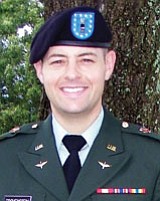 Warrant Officer Whitney G. Grovenstein graduated April 9, 2009, from U.S. Army Basic Training at Fort Benning, Ga. He graduated from Warrant Officer Candidate School on June 5, 2009, at Fort Rucker, Ala., where he is currently attending helicopter flight training. Whitney is a 2002 graduate of Bradshaw Mountain High School and a 2008 graduate of NAU with a degree in history education.

Lance Corporal Ezekiel W. Grovenstein completed basic training for the U.S. Marine Corps and graduated at the USMC Recruit Depot on Feb. 13, 2009. Since then he has completed advanced combat training at Camp Pendleton, Calif. and MOS training in transportation and mechanics at Fort Leonard Wood, Mo. Recently he was promoted to the rank of Lance Corporal at Camp LaJeune, N.C., where he is currently stationed. Ezekiel is a 2008 graduate of Bradshaw Mountain High School.