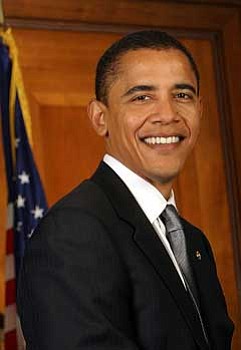 Does President Barack's speech to schoolchildren across the nation on Tuesday, Sept. 8, have educational value? If it does, teachers in the Chino Valley Unified School District are welcome to incorporate the speech into their teaching plans.

Superintendent Duane Noggle decided not to air the speech live, so students in the CVUSD, like their counterparts in the Humboldt and Prescott unified school districts, did not get to watch it.

Noggle told the CVUSD Governing Board Monday, "It was a very good speech that everyone should hear. Because of the controversy surrounding it, all the students would have heard is the controversy.

"The guides, especially the first one posted on the Department of Education's website, contained questions that were poorly written and may have been construed as political in nature," he said.

Noggle stressed that he never banned the speech; he just said the district couldn't air it live.

Susan Clark, principal of Del Rio Elementary School, said her school and Territorial Elementary School couldn't have showed the speech live if they had wanted to because they don't have Internet access.

Board member Jo Kelleher said she was disappointed to read how many schoolkids got to watch the president's speech as it aired live while Chino Valley's couldn't see it.

Kelleher said she did not feel the curriculum guides were political - just overwrought and too long.

Board member Paul Mitchell, who adamantly disagreed with Noggle's decision, said he believes the district had an opportunity to take a nick out of the community's polarization.

"We missed an educational opportunity by not showing the president's speech," he said.

Board Chairman Travis Bard said, "When it becomes a divisive issue for our president to speak to our kids, it scares me. Unfortunately, the way it was handled nationally further increased the divisiveness."

Bard believes the teachers and administrators were pawns.

"The (president's) speech should have been seen by all the kids in America. However, the system didn't allow that to happen," he said.

Board member Peter Atonna said the controversy saddened him because most of the nation's presidents have spoken to the nation's schoolchildren.

"His whole message would have been lost by the (controversy's) viciousness," he said.

However, he said, Noggle made the right decision.

Kelleher said the reaction of groups was unbelievable, and that a letter the board received from a parent was "hateful."

"So what do we do now?" Kelleher asked.

Noggle said, "You're the board. The decision I made didn't come easy. However, I believe it was the right decision."

Since she had no copy of the speech, Clark missed an educational moment with the parents when they called in about Obama's speech.

Bard said, "I don't know that the president's speech can't be a learning tool."

Atonna asked if it could be a tolerance lesson. "Sometimes you have to start tackling (the issue)," he said.

Kelleher said she thinks the speech has a lot of value now.

Michael Fogel, Heritage Middle School dean of students, asked, "How can we bring it back to the classroom without creating the problem again?"

Atonna said he wasn't sure if it was too soon. "I'd hate to see us not use it," he said.

Kelleher said now that the furor has died down, any teacher wanting to use it should be allowed to with the option that parents can opt to not allow their children to see it.

Noggle said the district's teachers have the right to use any material as part of their teaching plan.

Kelleher said she feels it will be better if teachers know they can show it. Noggle said the district can download the president's speech from the Internet for any teacher wanting to use it.

The board decided not to take any action, but to assure teachers in the district they can show the speech if they can fit it into their curriculum.