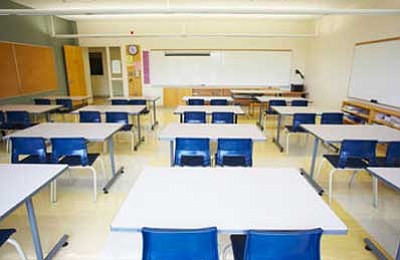 Superintendent Duane Noggle said, "This is the largest decline amongst the four school districts in the area."

Noggle said CVUSD's largest decline is at Territorial Elementary School - 474 this year versus 554 this past year. "I believe the new charter school in Paulden is responsible for this because I have heard it has about 60 students enrolled," he said.

The only school in the district to show an increase in its student enrollment is Heritage Middle School, which had 671 students enrolled on Aug. 31, compared to 657 the previous academic year.

Noggle said as of Aug. 31, 72 students from outside the district were attending CVUSD schools. This is down 10 students. The largest number of students - 43 - comes from the Prescott Unified School District - the same number that came from there in 2008-09. The second-highest amount of students - 19 - comes from Prescott Valley, as compared to 24 from the past year.

Board Chairman Travis Bard asked if Noggle saw any surprises in the figures. Noggle said the surprise he saw was the number of students going into online learning.

Noggle said CVUSD's top competition is charter schools. "The public doesn't know charter schools don't have to have certified teachers," he said. "We need to do a better job in advertising and educating parents."

Bard asked if the students going into online learning are the same ones they would have seen in home-schooling a couple of years ago.

CVHS Assistant Principal John Scholl said, "These are students who aren't successful in public schools for social reasons. Also, students in the high school rodeo program like online schooling because it frees up time for them to practice. These students are not the typical home-schooling students.