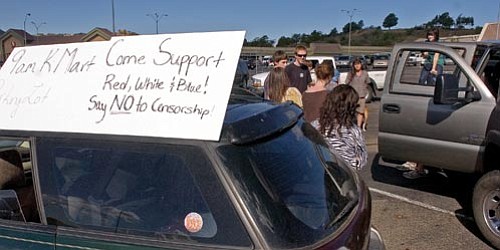 The students gathered in the parking lot - some with parental permission, some without - because Prescott Unified School District Superintendent Kevin Kapp decided this past week that district schools would not broadcast the president's speech.

At the time, Kapp said he supported the speech until he received a copy of the suggested lesson plan from the White House.

Kapp did not return telephone calls from the Daily Courier on Tuesday.

PHS senior Kathryn Van Demark said Obama's speech was "inspirational. It could have benefited many students. I am saddened that more students didn't have the opportunity to hear it."

Rich Van Demark, who signed his children out of school, said he is proud of his daughter and son and the other students who skipped school to listen to the president.

"I think it was important for them to hear the president. The speech is definitely non-partisan. It is about being patriots of our country," Rich Van Demark said.

Matthew Kendrick will receive an unexcused absence for Tuesday morning. Kendrick said his parents did not know he planned to skip second period and that they would "probably be angry. My parents are pretty liberal, but I think they value my education more than I do."

Parent Marilyn Howden was outraged that her son had to go somewhere off-campus to listen to the speech.

"They couldn't watch it anywhere on campus - not even in the library. The students had to come off-campus to listen to the president talk about education," Howden said.

"What gall to make that decision for all children. Not only is it discrimination and censorship, it is unpatriotic," Taillole-Nardo said.

Senior John Kelly was upset that district administrators decided not to show the speech because it was "politically motivated. No wonder Arizona is 50th in the nation in education."

Bradshaw Mountain and Chino Valley high school officials did not see an increase in the number of parents taking students out of class or students not coming to school.

Chino Valley Unified School District Superintendent Duane Noggle said the district received "no e-mails, no phone calls, at least at this level. One school did report that a parent called and asked if the school would be showing the speech, but that was all. It was just a normal day."

Kathryn Van Demark said, "Many of us feel that current events are an important part of our education. Most of us are in advanced-placement government, and we were not allowed to hear or discuss the president's speech. I think that is hindering our education more than the 15 minutes listening to the speech would have," she said.

McCormick said that while her sixth-grade daughter could not watch the president, her daughter "was allowed to watch part of the Michael Jackson funeral" as part of a news roundup during homeroom.

The irony, she said, was that her daughter had to listen to the president tell kids to stay in school while she was missing school.

"He was talking to children. It was non-controversial. No one could have objected. The lesson my daughter learned was partisanship and fear," McCormick said.