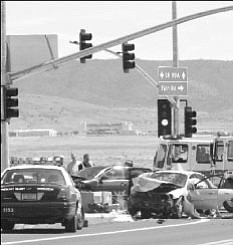 This accident at Highway 89A and Robert Road resulted in serious injuries to a Cottonwood man and non-life threatening injuries to four Anthem residents. <br> Photo courtesy Shirley J. Williams

A traffic collision Saturday morning resulted in serious injuries to a Cottonwood man and non-life threatening injuries to four people from Anthem.

Prescott Valley police arrived on the scene of a two-vehicle collision at the intersection of Fain Road and Highway 89A at about 11:35 a.m., said PVPD Sgt. Brandon Bonney in his press release.

The collision involved a silver 1997 Ford Escort driven by Jeffery Gilbert, 27, of Cottonwood, who was heading eastbound on Highway 89A.

Vincent Loscalzo, 36, of Anthem was driving the other vehicle, a grey 2004 Honda Accord, with three passengers - a 34-year-old female, and two children ages 3 and 6. Their vehicle was traveling westbound on Fain Road.

Bonney said Gilbert was attempting to turn left at Highway 89A at Fain Road when his vehicle collided with Loscalzo's vehicle which was traveling across the intersection.  Witnesses on scene said the traffic light signal was green for both drivers.

Lifeline Ambulance personnel transported Loscalzo and his passengers to Yavapai Regional Medical Center East Campus for what appeared to be non-life threatening injuries, and released them later that day.

At this time, alcohol and/or drugs do not appear to be a factor in the collision, Bonney said.

PVPD and the Yavapai County Sheriff's Office temporarily shut down the highway, then opened one lane of traffic for about two hours while the accident reconstruction team completed their investigation.

PVPD has issued no citations at this time and continues with the investigation.