El Ni&#241;o hurt before but could help later 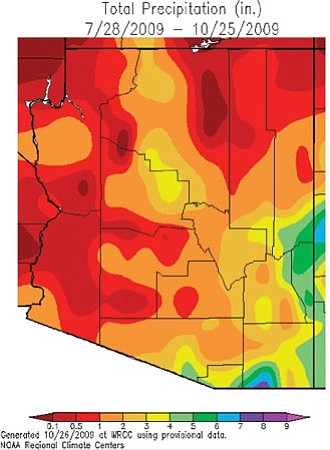 PRESCOTT - What El Niño taketh away during the monsoon, it could giveth this winter, climatologists say.

El Niño helped turn off the monsoon rains spigot much earlier than usual, Erik Pytlak of the National Weather Service said during an online climate briefing Monday. His agency periodically conducts the online briefings with climate experts from the University of Arizona.

"That's probably the primary driver in terms of shutting the monsoon down," Pytlak said of El Niño.

A low-level jet stream didn't really set up in the Four Corners region, so much of the precipitation went off to the Lower Mississippi River Valley, Garfin said.

But El Niño can bring above-average precipitation to Arizona winters if it's strong enough, and that could happen this winter.

Yavapai County experienced its second-driest monsoon in 59 years this year, said Gregg Garfin of the University of Arizona's Institute of the Environment.

After looking pretty good in June, most of Arizona now is in a severe drought, with the rest experiencing a moderate drought.

"We have many, many reports of forced liquidation of (cattle) herds," said Michael Crimmins, climate science extension specialist for the U of A.

As sea surface temperatures increase in the Pacific, climatologists are getting more and more confident that this could be Arizona's strongest El Niño since the winter of 2002-03, although it likely will be weaker than 1997-98, Pytlak said.

Unfortunately the 2002-03 winter event petered out early, and Arizona still experienced a severe wildfire season in 2003.

The months of January through March are likely to experience at least a moderate El Niño effect here, Pytlak said.

Northern Arizona has a slightly elevated chance of above-average temperatures this winter, but indicators for southern Arizona aren't swinging one way or the other.

Pytlak noted that historical El Niño statistics go back only a century, so it's hard to say if El Niño is related to the precipitation event earlier this month and the one coming later this week.