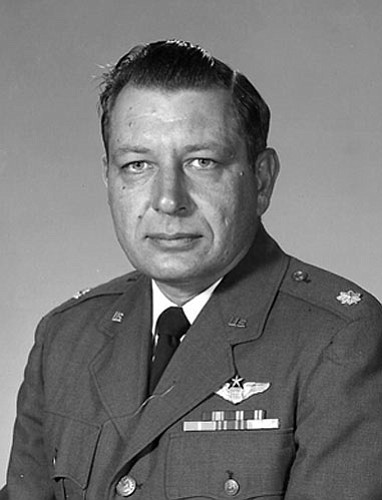 After graduating from Irondequoit High School in Rochester, he attended the University of the State of New York Education Dept. When the Korean War started, Bruce entered the USAF in December 1951 at Sampson AFB in New York. He then entered the Aviation Cadet Program in 1952, graduated as a navigator in 1953 as the Honor Student of his class and was the Cadet Colonel while attending. His schools were Connally AFB, Harlengen AFB and Shepard AFB, all in Texas. From 1953 to 1954 Bruce served as an instructor at the Air Force Instructor School at Ellington AFB Texas. He was then selected to be an instructor at Flight School, Connally AFB, Texas, from 1954 to 1956.

Bruce separated from active duty to attend college and entered the Air Force Reserves in November 1956. He attended the University of Texas from January 1957 until January 1960 and graduated from the School of Pharmacy. He practiced as a pharmacist from January 1960 until April 1968.

He then returned to active duty in the Air Force in April 1968. He was assigned to the 302nd Air Sea Rescue Recovery Squadron, Luke AFB, Ariz., until December 1972. From Luke AFB he was assigned to Norton AFB, Calif., and Maxwell AFB, Ala., until March 1975. While assigned to Norton AFB, he participated in the war in Vietnam, earning three campaign medals. He attended Air Command and Staff College while stationed at Maxwell AFB and simultaneously earned his Masters of Political Science from Auburn University, State of Alabama. In 1975 he completed Air War College as an Honor Graduate. From March 1975 to March 1985 he was assigned as Director of Training for Air Force Reserve Command at Robins AFB, Ga. He retired from active duty with a combined 32 years of service, 20 years active duty and 12 years Air Force Reserves. Bruce loved his country and served it with pride.

He earned his Doctorate of Pharmaceutical Medicine from the University of Texas in 1982. He practiced as a pharmacist for the last 24 years in the Phoenix area, and also the Cottonwood and Prescott area. He loved his work and didn't know the meaning of retirement.

Bruce is survived by his loving wife of 12 years, Wilma; his daughter Ramona (Dave) Miller of Ohio; his son Daniel (Sherri) LaForce of Florida; his stepdaughters, Rebecca (Mike) Tenpenny of Flagstaff, Ariz., and Gayle Manor of California; and stepson Steve Manor of Flagstaff, Ariz.; his sister Joan Durkin of Rochester, N.Y.; nephews Mark and Tim Durkin of Rochester; and niece Susan Speer of Rochester. Also surviving are grandchildren, Amanda, Laura, Holli, Sean, Ben, Brian, Matthew, Lindsey; and nine great-grandchildren. Bruce was a very special person to all who knew and loved him. He will be greatly missed by all his family and friends.

In lieu of flowers, donations may be made to Mountain Valley Church of God - Building Fund. This project was very special to Bruce's heart.

A Celebration of Life memorial service will be 3 p.m. Sunday, Nov. 1, 2009, at the Mountain Valley Church of God, 8123 E. Manley Dr., Prescott Valley, Ariz.; telephone number (928) 772-5713. Pastor Don Tjiema will officiate. The Honor Guard from Luke AFB will participate in the memorial service. A private interment for the family will be Nov. 2, 2009, at Prescott National Cemetery.