Mayer roars back in second half for Homecoming win 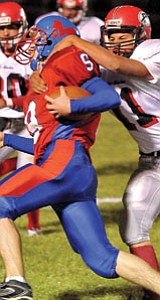 "I didn't rant and rave tonight," Lashley said of his halftime talk. "I just told them, 'You guys have got to go out there and play like we practiced.' And they did."

Mayer (3-3, 3-2) all but locked up a state berth with the victory. It has a non-region game next week against Salome and closes the regular season on Oct. 16 against winless Ash Fork.

But the Wildcats weren't celebrating anything.

"No," junior running back Nathan Saucedo said, "We take it one game at a time, trying to get to the playoffs step by step."

Saucedo led the way for Mayer with 145 yards rushing on 13 carries and two second half scores. He credited the blocking for the offense picking things up after halftime when it reached the end zone on four of six possessions.

He also credited the defense.

"Defense stepped it up," Saucedo said. "They contained the run. They didn't get anything past us in the second half."

Before halftime, Beaver Dam had some success moving the ball, going 5-for-7 on third downs and 2-for-3 on fourth downs.

After the half, Mayer held the Diamondbacks to only one first down and shut them out on the scoreboard.

"Coach during halftime, he told us to step it up," senior Daniel Mendoza said. "We were slacking off so we had to step it up on defense."

Mendoza was a big part of that, recording four tackles for loss as the entire team was hitting harder and blocking harder right from the second half kickoff.

"I don't think we are where we should be," Mendoza said of the team's progress to this point. "We need to step it up and work harder this coming week. I hope that next week we get a win and we have to step it up."

A trip to state is almost a lock now.

The Wildcats will have two games to gear up for that.

Mendoza and David Atkerson also reached the end zone for the Wildcats.

Like Saucedo, Blake Ambrose got a pair of touchdowns, giving him 11 on the year.

One of Ambrose's TDs came on a 51-yard crossing route, collecting the pass from junior quarterback Tony Warburton for Warburton's 12th touchdown pass of the year.

Mayer's Nathan Saucedo. The junior ran for 145 yards and two scores on just 13 carries while getting in on 15 tackles - four for a loss - on the defensive side of the ball.