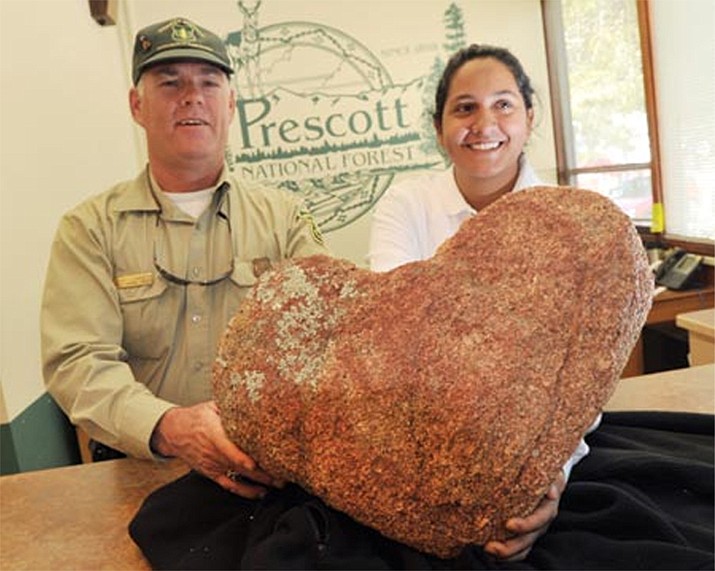 The heart of Granite Mountain has returned.

For more than a decade, climbers have made it a ritual to stop at the unique rock before and after their climb on the vertical face of Granite Mountain.

"We sort of got our center by standing on this rock, and now it's gone," Steve Munsell, the Adventure Program coordinator for Prescott College, who has been climbing Granite Mountain for three decades, told The Daily Courier last month.

He had to wonder if the person who took the rock was facing any bad luck.

"I think that would be unfortunate, but it's not a rock I'd want to be in possession of," Munsell said.

Forest Recreation Team Leader Bruce Fahrni happened to be there Monday morning when a man walked into the Prescott National Forest front office with something wrapped in a towel.

"He sat it down on the counter and said, 'This is for Jason Williams. He'll know what it is,'" Fahrni related.

Williams, a Prescott Forest wilderness ranger and avid climber, asked Daily Courier readers to call him and return the rock. He assured everyone that the Forest Service would not prosecute anyone, though it generally is illegal to remove objects from the forest without a permit unless someone is participating in recreational gold panning.

Williams said an anonymous man phoned him last week and explained that a Phoenix friend took the rock.

"When they learned the significance of the rock to local folks, they decided to return it," Williams related.

A Daily Courier online blogger said on Sept. 30 that a girlfriend of a Prescott resident took it for her Phoenix garden, but felt bad about it and planned to return it this past weekend.

Contacted via e-mail by The Daily Courier, the reader added that he learned the details through climbing blogs. The woman apparently collects heart-shaped rocks for her garden.

Apparently she's not the only one who collects heart-shaped rocks. Williams said at least three people contacted him with offers to donate their own heart-shaped rocks to the mountain, which is sacred to the local Yavapai Indians.

Williams said he and other climbers plan to tote the approximately 65-pound rock back up to the top of the mountain on Friday. It's about a two-mile hike. The rock sat along a primitive social trail that leads to the mountain's cliff face.

The rock's return gave Williams a little more faith in humanity, he said.

"If I had to put money on it, I didn't think it would come back," he admitted.