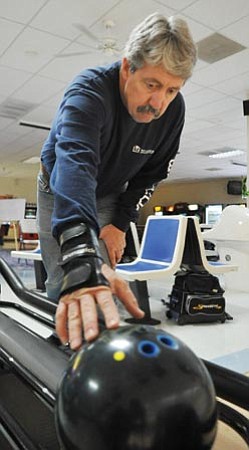 Les Stukenberg/The Daily Courier<br> One activity that Phil Phillips enjoys is bowling since getting treatment in Germany for his Parkinson's disease.

PRESCOTT - Two years ago, Aubra "Phil" Phillips just about had enough of living with Parkinson's disease.

"I was about ready to commit suicide," he said from his Prescott Valley home. "I was stumbling around, falling, had the shakes and I slurred my words."

Today, after two stem cell transplant surgeries at the XCell-Center in Cologne, Germany, Phil walks and talks like any other healthy, articulate 59-year-old grandfather.

"I noticed a change the very first day after his first operation," said his wife Donna, who watched Parkinson's disease steadily eat at Phil's body and mind for the past 22 years. "He didn't shuffle anymore and he smiled again."

Doctors treat Parkinson's victims with a smorgasbord of medication, vitamins and exercises.

Certain brain cells produce a chemical called dopamine. Dopamine is a chemical messenger that transmits signals within the brain to control coordination. When those cells die, causing Parkinson's symptoms, doctors give patients drugs that cause brain cells to produce dopamine.

However, because there is no cure for Parkinson's, drugs mask symptoms without curing the disease. Symptoms include tremors, balance problems, lack of facial expressions and slow movements. The disease usually starts on one side of the body and migrates to the other.

"I was relatively happy and we were dealing with it until it started on my other side," Phil said.

After Phil's son, Michael, told him that he did not want Phil to carry his granddaughters anymore because of his balance problems, he started researching alternative methods.

"The XCell-Center uses my stem cells taken from my hip," Phil said. "Everyone thinks of embryonic stem cells, but that's not the only kind that can be used."

Phil and Donna flew to Germany in December 2008 for a lumbar puncture operation. He returned recently from his second operation. Surgery requires a patient to stay in Germany four to five days and costs about $10,000.

"The first day, they took the cells from my hip," he said. "We spent the next couple of days at the hotel sightseeing, and then you go back and they inject the cells into your spinal fluid. You have to rest for 36 hours and then go back for a final check up."

Donna said that humor is the couple's best weapon against Phil's disease.

"It's all about your attitude," Phil said. "There are no guarantees this operation works for everyone and the doctors tell you that.

"It was like turning a light bulb back on," Donna said. "He's laughing and smiling again. He wakes up every morning in a good mood. He started bowling and joined a league."

Donna said that going to a Parkinson's support group gave the couple hope and tools to deal with Phil's disease.

In spite of his disease, Phil worked as a heavy equipment operator until he retired in 2002. However, he is now helping the Prescott Valley Veterans of Foreign Wars Post 10227 build a VFW Hall.

"Before, I was angry at everything and put a lot of stress on my wife," Phil said. "Now, I enjoy being awake and taking care of the house for her."

A wealth of information about Parkinson's disease is available at www.michaeljfox.org/.