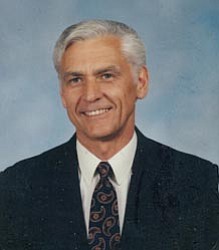 Dave was born on Dec. 18, 1941, in Clear Lake, Wis., to the late Pastor George V. Peterson and Elsa Berglunde. He graduated from Stephenson High School, Stephenson, Mich., in 1960. Dave's greatest friend was his wife of 46 years, Jeanne Davis, whom he married on July 20, 1963, in Peshtigo, Wis. He received a bachelor's degree in history from Point Loma College, Pasadena, Calif., in 1971. Dave taught at Garfield Elementary in Peshtigo, Wis., as well as in Southern Wisconsin, California and Iowa. Dave attended Palmer Chiropractic College in Davenport, Iowa, and received a Doctorate of Chiropractic in 1976. He practiced in Castro Valley, Pollock Pines and Huntington Beach, Calif., before moving to Prescott. Dave treated patients in Prescott and Bagdad, Ariz., in spite of his worsening health. He and Jeanne mentored college kids who attended First Baptist Church and helped out with the soup kitchen for the homeless. He was a selfless helper of people who were suffering and was greatly admired by his patients and friends. Dave loved traveling, track and field, football, basketball, reading and teaching Biblical verse, and was a gifted singer.

Dave is survived by his wife, Jeanne E. Peterson, and two children, Jodi L. Staff of Loma Linda, Calif., and David J. Peterson of Prescott. He is also survived by four grandchildren.

Heritage Memory Mortuary assisted the family with arrangements. Please log onto heritagemortuary.com to share a memory with the family.