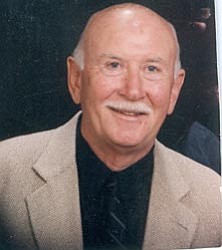 Daniel Anthony Mulhern, 82, of Phoenix and Prescott, Ariz., went to be with the Lord on Nov. 22, 2009. He was surrounded by family when he peacefully passed away. Dan was born April 9, 1927, in Breenagh (Donegal), Ireland, the eighth of 11 children.

He was the loving father of four, Michael (Sue), Maureen Tatum (Michael), Margaret Samuels (Pete) and Daniel II (who preceded him to heaven) and grandfather of seven: Danny, Brandon, Sean, Beth, Jared, Caitlin and Erin.

Dan moved to Canada in 1948 where he sailed on the Great Lakes as a wheelsman on an oil tanker. He moved to New York in 1950 and became a carpenter. In 1970 he moved to Scottsdale, Ariz., and became a custom home and apartment builder.

Dan was a loving father and friend and admired by those who knew him. He retired in 1986 to enjoy life with family, friends and his beloved soulmate of 19 years, Joan.

He is survived by three sisters, Sheila, Nora and Eileen.