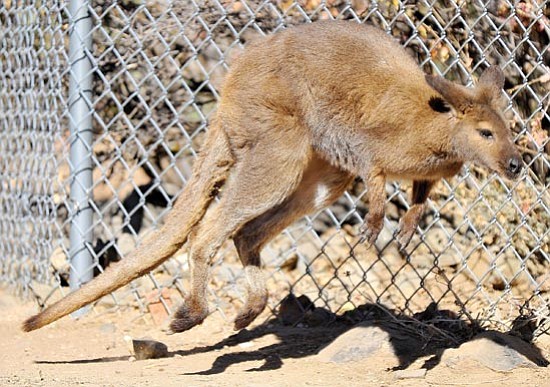 It will cost only $1 to visit the Heritage Park Zoological Sanctuary this Saturday and Sunday as the sanctuary celebrates the arrival of two new residents - Bennett's Wallabies named Wally and James.

Wally and James, father and son, are making themselves at home with Ollie the emu, whose previous roommate was a goat. As they get to know each other, Wally spends a lot of time inside the lean-to, while James is more inclined to explore his new enclosure.

"James is neutered, while Wally remains intact," according to animal keeper and education coordinator Lacey Macomber.

Native to Australia and New Zealand, wallabies are a cousin to kangaroos, but are a separate species. Australia has stopped the export of wallabies, so breeders can only import them from New Zealand.

It is from a Phoenix-area breeder, now closed down, that the wallabies began their journey to Prescott.

"We had a request from one of our donors for wallabies," Sanctuary executive director Pam McLaren. "Since we are a sanctuary and do not buy animals, the chances of getting wallabies were slim to none."

Coincidentally, soon after this request, officials at the Deer Farm west of Flagstaff contacted McLaren about two wallabies it was taking in but could not keep. The Deer Farm is home to a mob (herd) of female wallabies, but it could not take Wally and James since Wally is not neutered.

McLaren said wallabies live between 15 and 20 years in captivity. Officials think Wally is eight to 12 years old and James is three to five years old.

Wallabies grow to about three feet tall. Wally weighs about 40 pounds, and James weighs between 25 and 30 pounds.

Wally seems most comfortable inside the protective shelter, while James loves to lie in the sun.

Macomber said wallabies clean their hands and fidget a lot. Their diet includes a special grain called Happy Hopper and a wide variety of fruits and vegetables. Wally and James like apples, yams and carrots.

The Heritage Park Zoological Sanctuary's winter hours are 10 a.m. to 4 p.m. daily. It is located at 1403 Heritage Park Road, across from Embry-Riddle Aeronautical University on Willow Creek Road.