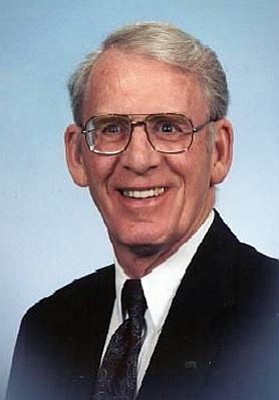 William Ray (Bill) Powell, 78, resident of Prescott, Ariz., since 1984, returned to his Heavenly Father on Nov. 9, 2009. He was born to Louis C. and Ella Dienstbier Powell in Ravenna, Neb., on March 14, 1931. He graduated from Ravenna High School in 1949. During his college years in Nebraska, he lettered in four sports: football, basketball, track and golf. He remained a lifelong, dedicated Huskers fan. In his sophomore year, he made the decision to leave the light-hearted life of a college student athlete, making the sacrifice to serve his country by joining the Navy during the Korean War. It was during that service in 1953 that he suffered a catastrophic brain injury, leaving him in a coma for six weeks, paralyzed on his right side, and unable to speak. After years of persevering through difficult and sometimes excruciating rehabilitation in Naval and VA hospitals, he resumed his college work, transferring to Central Missouri State College in Warrensburg, Mo. It was there that he met the love of his life, Marjorie Dunwiddie. They were married on March 7, 1957. Bill then graduated in 1959 with a BS in business administration. He served in VA hospitals in Omaha, Indianapolis, Memphis, Muskogee, and finally Albuquerque, N.M., where he retired as the Chief of Prosthetics for the Southwestern Region in 1980.

In 1981, he received Christ as his Savior and was changed for eternity. In 1984 Bill and Marjorie moved to Prescott, not to retire, but to begin a new chapter of service to their community and church. Bill served on the Prescott 20/20 Committee, Prescott Blind Center Board, and the Prescott Evening Lions Club in various capacities, including president, later transferring to the Sunrise Lions Club, where he was involved with many community projects. He was a member of the Village Idiots, a neighborhood men's lunch group. At Willow Hills Baptist Church, Bill served as deacon and in many other capacities.

As his health began to decline in 2006, Bill returned to the VA hospital system, this time as a resident in long-term care. He continued to serve others, always finding the positive side, encouraging staff and fellow veterans alike.

The family is requesting that in lieu of flowers, donations be made to Willow Hills Baptist Church, 1071 Mogollon Road, Prescott, AZ 86301, or Four County Conference on Developmental Disabilities, 325 N Arizona, Prescott, AZ 86301.