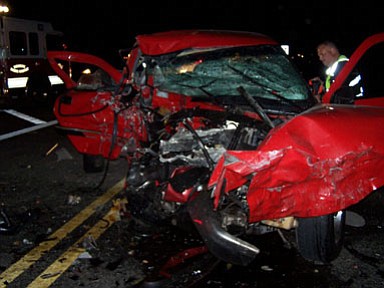 Mayer resident Raymond Cook lost his life on Nov. 5 when his Dodge Durango, travelling in the wrong lane on Highway 69, collided head-on with this pickup.<br> Photo courtesy Mayer Fire Dept.

A Mayer man died Nov. 5 and two people were injured in a collision on Highway 69 about six miles north of the community.

Dept. of Public Safety officials said that shortly before 6 p.m. this past Thursday at milepost 275.5 near the Mayer Fire Dept. entrance, a Mayer area woman driving southbound in a small SUV swerved to avoid a head-on collision with a 1998 Dodge Durango driven by Mayer resident Raymond Cook, 61. The SUV driver lost control after she swerved, and rolled the vehicle, said DPS Sgt. Tim Hawes.

DPS officials said Cook then continued northbound in the wrong lane to about milepost 276, where he collided head-on with a 2000 Chevrolet pickup.

Emergency personnel took the SUV driver to the hospital, where she was treated and released the same night. A helicopter flew the driver of the Chevrolet, 50-year-old Walter Neitzel of Phoenix, to a Phoenix area hospital. Cook died in the collision.

UPDATE: Mayer man dies in head-on car crash
One dies in head-on crash near Mayer
Wrong way crash kills woman on I-17
Two wrong-way drivers arrested on I-17 over the weekend
DPS: 1 dead, another critically injured after head-on collision near Paulden