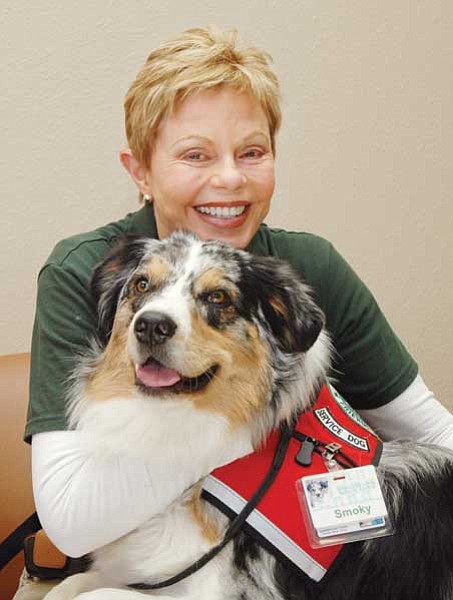 When patients at the Yavapai Regional Medical Center in Prescott receive a visit from a big, friendly Australian Shepherd therapy dog, they don't often notice that on the other end of the lead is '70s pop music icon Toni Tennille.

At the hospital however, it's the happy personality and soft, shiny coat of "Smoky" that draws people's attention when the two enter the room. Then, Tennille said, about one out of eight patients say, "You look familiar!" They make the connection when they look at Tennille's ID badge.

The couple lived in a home they loved in rural Northern Nevada, but six-to-eight feet of snow each winter got a little overwhelming. Friends told them about Prescott.

The two visited for a weekend, and the next weekend bought a lot in a Williamson Valley subdivision, which they liked for its western, outdoors flavor.

The two had fallen in love with Prescott, but they also loved the home that Dragon had designed in Nevada. They solved the problem by building the same plan, with a few changes.

"It was weird when we walked in," Tennille said of the house when it was finished. "It's even sited the same way now. It's like the same house with different scenery."

The couple lived in the Kingswood subdivision for a year while waiting for the house to be completed. While she was walking her two Aussies one day, Tennille met Dale Johns, another Aussie lover. Johns introduced Tennille to Kathy Bryan, who is one of the team leaders of the PAWS (Pets are Warm Support) program at YRMC. The two became fast friends, supporting each other through the loss of Tennille's dog "Hubble" and Bryan's dog "Moon" to cancer. Moon was a nationally ranked champion and therapy dog legendary to patients and staff at YRMC.

Tennille met Smoky, one of Moon's sons, at Bryan's house when he was 2 weeks old. When Smoky turned one, and Tennille and Dragon's home was ready, Bryan agreed to let them take Smoky home.

The pup was a very mellow, sociable dog that was perfect for the PAWS therapy program. Tennille and Smoky tested for PAWS, and earned a "complex" rating, which means the team is allowed into intensive care and IV therapy areas of the hospital.

Tennille's sister and her husband are hospice nurses, and Tennille said she always has wanted to volunteer in a hospital. Her career would never allow the time, until now. Every Thursday, patients can see the tall, smiling singer and the eager Smoky in the halls of YRMC. And Smoky has his own way of winning over his audience.

"He's a leaner," said Tennille. "If a patient is in a chair, he'll go over and lean in real cozy and nice."

Tennille said she enjoys seeing the change in patients when she brings her dog in for a visit.

"When Smoky comes in, the patient might be reserved, or glum. But then the whole thing changes. They can forget that they are in the hospital for a few minutes. For that short period of time you've made a difference," she said.

Perhaps nowhere else is that more apparent than in ICU, she added. "People feel like, if a dog can come in, it's not as scary. A dog is so normal."

What's ahead for the Captain and Tennille?

Parkinson's disease has slowed his fingers at the keyboard, but Daryl Dragon loves spending time with Smoky, who bestows plenty of TLC and "leaning" at home. Tennille said Dragon, to whom she has been married for more than 30 years, is doing well, and enjoys walking with the neighborhood pack of dogs and good friends who meet each day for a 45-minute trek.

Tennille has performed in several events, including a sold-out benefit concert at the 2009 Prescott Arizona Jazz Summit in August.

In an entry on her blog, Toni's Take, in August, Tennille wrote of the couple's scaled down life in Prescott, "...I have never had more fun in my life... have never laughed so much or enjoyed life more."

Now, along with Smoky, she's spreading that fun and a big dose of compassion to patients at YRMC.