Not quite enough: Rare May rainstorms won't halt fire bans 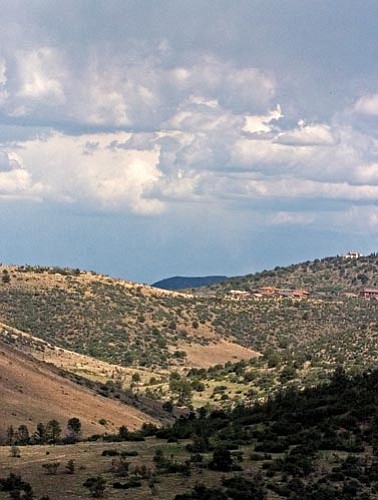 Northern Arizona has been experiencing some highly unusual moisture this May, but wildland fire officials are letting people know they have no plans to loosen fire-use restrictions.

Prescott has exceeded its 111-year average May precipitation of 0.47 inches by 160 percent, with 0.75 inches falling between May 21 and Thursday evening at the official Sundog measuring site on the northeast side of town.

May typically is the second-driest month of the year, yet some northern Arizona communities have recorded more than an inch of rain. In Yavapai County, Jerome has received 1.31 inches, Clarkdale got 1.58 inches and Sedona recorded 2 inches.

Holbrook set an all-time single-day record of 3.5 inches on May 22. The Weather Service received reports of flooding in Page, Kayenta and Oak Creek Canyon.

The following day, the Weather Service received reports of 1.3 inches of hail on Interstate 17 in Yavapai County that caused traffic accidents, as well as reports of flooding in Cottonwood.

A weak upper level low-pressure system has been hanging around the region for more than a week now.

"This is a very rare event to have this kind of pattern," said Robert Bohlin of the National Weather Service office in Flagstaff.

He added that the weather patterns are not like the monsoon pattern that usually arrives here in early to mid-July.

The Prescott National Forest went into fire-use restrictions May 21, and the county and local jurisdictions joined in. At that time, the Weather Service and Forest Service forecasters were predicting scattered thunderstorms over the Memorial Day weekend, but forecast the cut-off low would exit the region soon after Memorial Day.

However, skies have remained cloudy and the current forecast calls for a slight chance of thunderstorms to continue through the short-term forecast period Monday.

The fire danger has not hit the "very high" range since May 20.

"It does seem illogical (to have fire restrictions), but there is a good reason," said Mark Johnson, fire management staff officer on the Prescott Forest. "We want to minimize the amount of exposure we have out there when it does warm up."

He added that it's confusing to the public and logistically hard to rescind fire restrictions, too. The Forest Service and other agencies would have to remove numerous signs and then turn around and post them again.

"Maybe we put in the restrictions a little early, but we were uncertain about the rains and the holiday was coming up," said Central Yavapai Fire District Marshal Charlie Cook.

While the rains have reduced the fire danger for the past week, the danger could be right back up to its usual May range within another week, Johnson said.

Already, the Forest Service is rating west-central Arizona as the driest in the Southwest for the coming week.

The rain has not been consistent, Johnson added.

Other Yavapai County rainfall totals for May include 0.46 inches at Seligman, 0.17 inches at Bagdad, 0.58 inches at Ash Fork and 0.83 inches at Humbug Creek in southern Yavapai.

While the fire season undoubtedly will become more dangerous, it's likely to be a short one this year.

Weather Service and university climatologists are forecasting an early monsoon that will start out unusually strong in Arizona, much like last year.