He who laughs last has a backup disk 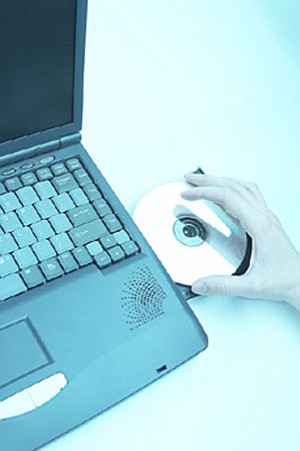 Q: My computer has never had a hardware problem. Do I really need to backup my data?

A: The fact that you've never had a hardware problem means you've been very lucky. But it doesn't mean you won't in the future. Some would say it's almost inevitable, since you have moving parts in your computer - specifically the hard drive, which is spinning at thousands of RPM, with a read/write head flying back and forth millionths of an inch above the spinning disk surface. You get the picture. So you should back up your data. How often is a matter of your computer usage.

First, you should make a full backup of your "C" (and any other) drive, using something like R-Drive Image or Acronis True Image (there are others). Backup to a different physical drive within your computer, or to an external USB drive. Then, if your system crashes, you can restore the backup to the original disk or a new disk - no need to reinstall Windows and other software.

Periodically, create an incremental or full new backup to keep current. It's even a good idea to keep more than one backup so if one fails, the other can still be restored. This is especially important if, for instance, you do banking, writing, research, photo editing, etc. on your computer. Can you afford the time and effort to recreate your original work if it's lost? If you make a lot of changes, you might even do an incremental backup daily.

These programs also allow you to restore individual lost files by searching through your backup archives. Use Google for details on how these programs work.

Q: What is that weird-looking text that has to be typed into a box before you are allowed to add your comments to a website?

A. Those distorted images (usually of text) are known as a "captcha." This odd acronym stands for Completely Automated Public Turing test to tell Computers and Humans Apart. The "Turing" part of the name comes from a test that was originally designed to see if computers were developing (artificial) intelligence approaching that of a human.

In the case of a captcha, the intended result is to determine whether or not a human is attempting to access a section of the website. This has become necessary because of the proliferation of automated "bots" - programs that attempt to overload a website, creating a "Denial of Service" attack. In other cases, a spammer will attempt to acquire numerous free e-mail accounts at sites such as Google or Yahoo.

A captcha works by generating a test that humans can solve easily, but current software cannot. The program will generate some distorted text and then ask the user to type in the letters or numbers that he sees. A human will have very little trouble passing this test, while a computer has no reliable way to determine what letters or numbers have been generated. Other tests may involve having the human select which picture is that of a cat, for instance.

The spammers are fighting back and are beginning to create OCR (Optical Character Recognition) programs to determine what characters to enter in the box.

The Prescott Computer Society (PCS) is a PC-based users group located in Prescott. We hold several meetings each month to show you how to get the most out of your computer. For further information, please visit us at www.PCS4me.com. E-mail questions for future columns to PCSquestions@gmail.com.

Column: Stop spammers from getting your friends' e-mail addresses
Back up data on external drives, cloud
Flash drives have limited lifespans
Column: Use more than one method for data backup
Load your computer with all the RAM it can handle