Column: Selig no longer the fall guy for steroids 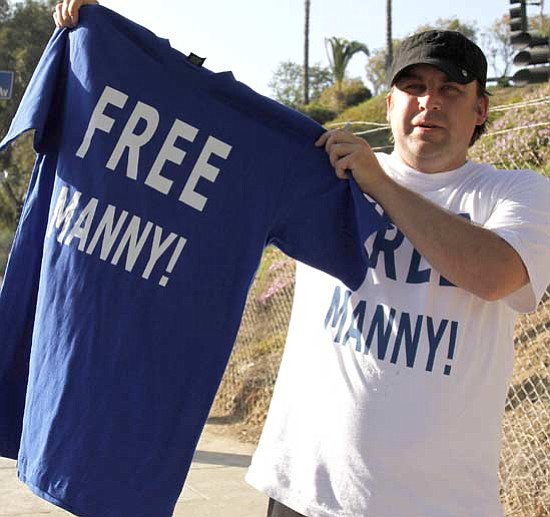 Danny Moloshok/<br>The Associated Press<br>The money trail from the steroids fallout has also reached enterprising T-shirt vendors like Kevin Rolfe in Los Angeles. Manny Ramirez will lose $7.7 million in salary, but the Dodgers stand to take a financial hit, too.

Originally Published: May 15, 2009 3:47 p.m.
Tweet
For years, Bud Selig has been taking heat from the media and the public on the issue of PED's in baseball. And for years, the commissioner has fended off his critics with a combination of fact, fiction and bluster, maintaining that he did everything he could to rid the sport of chemical enhancers. Selig has never passed up an opportunity to detail the efforts he and the owners have made to eliminate PED's, only to be thwarted at every turn by the players and their union.Despite Selig's protestations to the contrary, the owners dragged their feet in trying to eliminate steroids from baseball. When the bosses look the other way, and in some instances overtly encourage the use of performance enhancers, it's difficult for the worker bees to keep their hands out of the substance jar. But we can finally say that it's not the commissioner's fault that there are still players in baseball using banned substances.This isn't 2002, before there was a drug testing program in baseball and the likes of Jose Canseco, Mark McGwire, Sammy Sosa, Barry Bonds and who knows how many hundreds of others were juicing. This isn't 2003, when the results of a test survey to determine the extent of drug use in baseball were supposed to be anonymous, and Alex Rodriguez' name was leaked from a list of 104 players who tested positive.This is 2009, when MLB, as Selig is only too proud to proclaim, has the strictest drug testing program in all of team sports, and imposes the stiffest penalties for testing positive of any sport this side of the Olympics; when notice of that drug policy and those penalties is posted in every Major League clubhouse. And yet players are still ingesting banned substances, as evidenced by the fact that Manny Ramirez tested positive for a prohibited substance during spring training this year.Ramirez is just the latest MLB player to take a seat in drug-suspension purgatory. If you think he'll be the last, you also think the federal government will soon embrace fiscal responsibility. Won't happen. Many people, including this correspondent, have called for stricter penalties for those caught using, including a one-and-done policy. But even the ultimate penalty won't eliminate PED's in baseball. Want proof? How long have we had the death penalty? And that has eliminated murders, right?Illegal drug use in baseball is a matter of individual choice, and as long as the cheaters are ahead of the testers - and it will always be thus - some players will be willing to take their chances. There's too much money to be made and too little time to make it.The responsibility to stamp out drugs in baseball rests not with the owners or the commissioner, but with the players and their twin enablers, the MLBPA and the agents, neither of whom appears willing to fulfill their fiduciary responsibilities to their clients on the issue of PED's. From fighting the commissioner and owners in negotiations, arbitration and court, to spinning fairy tales for the players when they're caught red-handed, the union and the agents have been the ultimate co-conspirators.For all the money the players make, not to mention all the money members of the Scott Boras Fraternity make, you'd think they could afford to employ someone who would guard against players ingesting anything that wasn't "certified kosher." It may not be fair to single out one agent, but Boras has had his share of clients snared by the drug police. Boras' list of scofflaws includes Ramirez, Barry Bonds, Alex Rodriguez, Kevin Brown, Garry Sheffield, Eric Gagne, Ivan Rodriguez and Rick Ankiel, among others.Ramirez will lose approximately $7 million during his suspension - deducted over the four years his 2009 salary will be paid - but will still earn almost $38 million under the terms of his two-year contract with the Dodgers. So, what exactly is the penalty for getting caught using - shame and embarrassment? No bust in the Hall of Fame? Some players obviously prefer the money to their reputations and eternal enshrinement.And as long as that remains true, PED's in baseball will be a reality. But the pendulum has swung. It's no longer Bud Selig's fault.(Jordan Kobritz is a former attorney, CPA, and Minor League Baseball team owner. He is an Assistant Professor of Sport Management at Eastern New Mexico University, teaches the Business of Sports at the University of Wyoming, and is a contributing author to the Business of Sports Network. Jordan can be reached at jkobritz@mindspring.com.)
Report a Typo Contact
Sign up for Courier e-News Alerts
Most Read
7 days
30 days