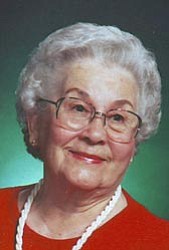 She married Wilbur Branson on Oct. 11, 1936, in Redondo Beach, Calif., where they resided and raised their family. Charlotte was active in the PTA and the church, teaching Sunday school there for 30 years. They retired in 1972 and moved to Lake Isabella, Calif. Charlotte and Wilbur shared 56 wonderful years together until Wilbur's death in 1992.

She enjoyed excellent health until about two years ago and because of advancing macular degeneration she decided to sell her home and move to Granite Gate Senior Living Community. Ultimately, she had to give up her two favorite hobbies, oil painting and reading, but did enjoy listening to books on tape and making new friends through the many activities provided there.