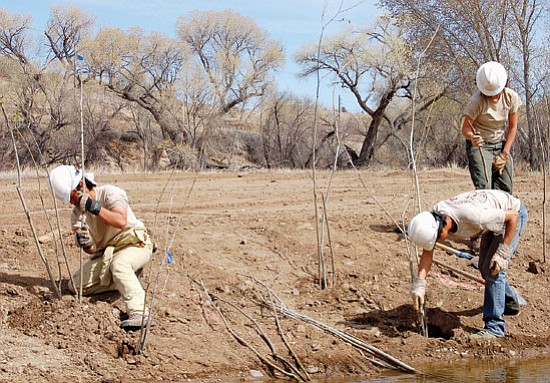 Prescott Creeks Preservation Association is well on its way to restoring the city-owned Watson Woods Riparian Preserve and the Granite Creek watershed by reviving its wetlands as well as a portion of the forest.

This past Friday officials with Prescott Creeks, a not-for-profit conservation group that has a 25-year renewable management lease on the preserve, paid tribute to the ongoing restoration work in a dedication ceremony, which celebrated almost 15 years of project planning and featured some tree planting.

Volunteer crews with American Conservation Experience have already started putting in an estimated 15,000 harvested cottonwoods, red willows and shrubs along a creek bed northeast of the Prescott Lakes Parkway and Highway 89 intersection off Sundog Ranch Road.

The Arizona Department of Environmental Quality, or ADEQ; the City of Prescott; the Arizona Water Protection Fund and Prescott Creeks are teaming up to complete the project, which will purify the site's water while reducing erosion and flooding.

Meanwhile, hundreds of Prescott-area volunteers have continued to assist the aforementioned agencies in their efforts to improve the watershed's water quality, protect its riparian habitat, and provide open space for native wildlife, Prescott residents and visitors.

To date, ADEQ, the Water Protection Fund, the city and the public have collectively contributed nearly $1.5 million in grants and donations to pay for the project. Prescott Creeks is using the money to relocate four reaches of the creek and create six temporary wetlands.

"When you think about riparian areas, it's really important to note that in the arid Western United States there's less than 2 percent of the total landform that is associated with that," said Rodney Held, executive director of the Water Protection Fund. "And yet they provide very essential ecological functions."

"Riparian areas in the Southwest, particularly in Arizona, are extremely rare, and they have been degraded over the decades," Card said. "Once the trees and grasses become established here, they'll uptake nutrients in the stream. That will create a balance that will help prevent algae growth and filter the water that way."

One of the project's main objectives is to restore the stability of the Granite Creek channel while maintaining natural stream function and bolstering riparian habitat.

"For five years after this project, we'll monitor its physical and biological aspects to make sure we're meeting the goals that we've set," Prescott Creeks Executive Director Michael Byrd said.

Prescott-based Fann Environmental, a division of Fann Contracting, is clearing and re-channeling the creek so it can develop a wooded wetland area. Natural Channel Design of Flagstaff is conducting the engineering and job-site supervision.

Mark Wirtanen of Natural Channel Design, an environmental engineering firm that specializes in river and stream restoration, said his company designed the Watson Woods project and completed the underground surveys. Natural Channel Design will monitor the restoration through to its completion and well afterward to ensure it is functioning properly.

"All total in the project, we created new meanders and about 2,700 feet of channel," Wirtanen said. "We do all of the construction supervision because we can design something on paper, but when you're on the ground in an actual system there are multitudes of changes that need to take place."

Tom Moody, a river runner and founder of Natural Channel Design who envisioned the Watson Woods restoration, died in a tragic small-plane crash in January.

"We were blessed to have had the opportunity to work with and learn from Tom," Byrd said. "His vision led Watson Woods and many other Southwestern rivers to be better places for us all."

Biologists say today's Watson Woods Preserve comprises only 126 acres of what they believe was a sprawling 1,000-acre forest stretching from Granite Dells and upstream toward downtown Prescott.

"Unfortunately, this area has somewhat of a sordid past," Byrd said. "It was full of poorly managed livestock grazing, illegal dumping and, more recently, sand and gravel extraction operations that have probably been the most degrading factor to this ecosystem."

However, after the preserve is refurbished, it will offer myriad public recreational opportunities, such as hiking and wildlife viewing of birds, lynx, bobcats, coyotes, elk and deer.

"When this project is finished, it's going to be a jewel in our portfolio," Mayor Jack Wilson said to a small crowd of spectators along the banks of Granite Creek this past Friday. "It's going to tie into the Peavine Trail, which is the heaviest used part of our trails system."