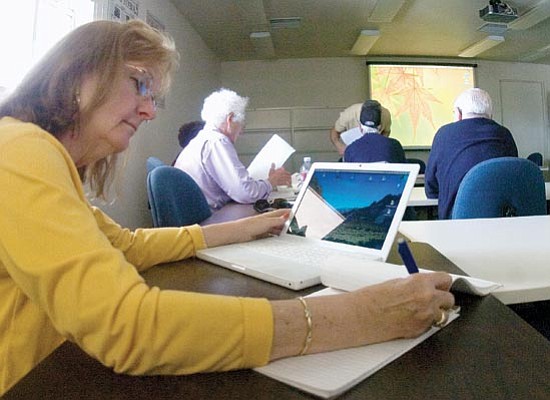 When Ron Woerner decided to retire in Prescott, one of the contributing factors was the Osher Lifelong Learning Institute at Yavapai College. Today, he not only takes classes, he also leads a class-Shakespeare's Henry IV.

The Osher Lifelong Learning Institute (OLLI) offers seniors, and people of any age, the opportunity to continue their education simply for the "love of learning."

Pat said she and Paul have "always been interested in things that are good for the brain. OLLI's six-week classes are a good choice."

Pat said she is not a teacher, although she did lead a class about living abroad.

As registration begins for the next session, Pat has registered for a class on impressionist paintings.

Bob Kane, chairman of the OLLI governing council, said that in 1993, a group of professionals enrolled in classes at the college. Known as the "blue hairs and no hairs," the retirees met and introduced the Yavapai Learning Institute to Yavapai Collage.

Kane said OLLI is self-governing, "but part of the division of life-long learning at the college."

With a staff of two assistants, OLLI operates almost exclusively with volunteers, who teach all of the classes. Kane said OLLI does not rely on any Yavapai College staff members.

"OLLI members find themselves, after all these years, in a learning process with no pressure," Woerner said. "We try to avoid lecturing and encourage interaction. While members may have some homework, there are no tests."

Woerner and Kane agree that as wonderful as the class offerings are, the biggest benefit of OLLI may be the socialization it offers its members.

"Surveys indicate the importance of the social aspects of OLLI. It is so important, that it often continues beyond the structure of the classes," Woerner said.

"There is a camaraderie, a closeness, that develops among the members. These are people from all different faiths and all different experiences," Kane said.

Muaro said OLLI provides an opportunity to meet, know and deal with many different people.

"Sometimes that spills over into the rest of your life and you go to dinner or a play," she said.

"I love to learn," the former insurance adjuster said.

Marlene takes classes every session, and she enjoys studying history, the environment and religions.

"Besides the classes, I like the camaraderie. OLLI is great for people who have lost their spouses," Marlene said.

Woerner said the more successful OLLI is, "the bigger draw for Prescott. Retirees will come to the area because of OLLI."

OLLI offers five sessions throughout the year. Classes generally run from 10 a.m. to noon or 1 to 3 p.m., Mondays through Friday.

Registration has started for the Spring 2 session, which runs April 7 through May 15.