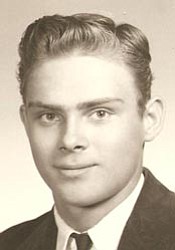 He attended Prescott public schools and graduated from Prescott High School in June 1960. He served in the U.S. Air Force for two years and worked for the Boeing Company in the late 1960s.

He lived in Arizona and California before moving to Port Angeles in 2004. He loved old cars, poker and archery.

Graveside services in his honor will be 10:30 a.m. Saturday, March 21, 2009 at Mountain View Cemetery in Prescott, Ariz. with a gathering of family and friends to take place after the service at the Willow Lake Ramada in Prescott, Ariz.