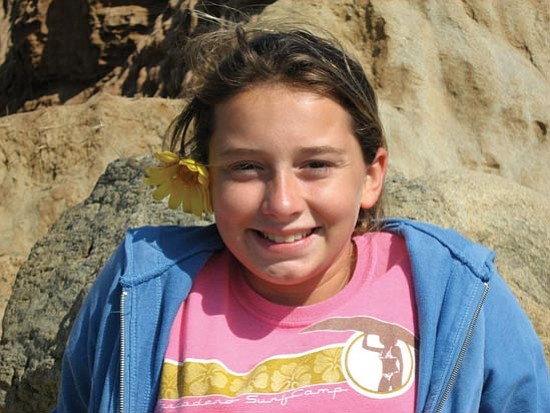 Courtesy<p> Fiona Jackson shares her grandfather’s talent for witty writing. (No, Jerry did not provide this caption.)

Wife Pat and I have this granddaughter in San Diego, Fiona Jackson, who is cute as a bug, sharp as a tack, and friendly as a huntin' dog. (The similes abound!) We drove over to the coast last week to help celebrate her 12th birthday, and while there our son Kerry shared with us a copy of "The Fred Chronicles," a trilogy of essays that Fiona composed last year. They're delightfully written and, I think, are suitable for sharing.

First, there is the word picture of the man: "Fred is short and fat. He has mousy brown hair. He is a very strange man. He washes and conditions his mustache EVERY day. For such a strange man Fred is very clean. He works at Wal-Mart. But he thinks he is a VERY famous movie star. That is how strange he is. Fred has a good sense of humor and is very honest. He lives with his pet myna bird. He talks to him all the time. Mr. Myna (for that was his name) called Fred Elmo but Fred understood. Mr. Myna LOVED Sesame Street."

Our friend Fred, though, has a problem, in that he "is in love with his manager at Wal-Mart. But he does not think she likes him. He tries very hard to get her to like him by hugging her every chance he gets."

The hugging, it turns out, pays off handsomely, with the telltale hint being embodied in the title of the final trilogic segment: "Fred Gets Married."

Following is Fiona's rundown: "Fred was born in Tennessee and he still lives there today. As you already know, Fred works at Wal-Mart. He is deeply in love with his manager, Jamie. She is young and beautiful. Secretly, she deeply loves the not so young and not so beautiful Fred. Fred thinks she doesn't even know his last name.

"One day, Fred approached her. He was going to hug her but decided against it. Instead, he blurted out, 'Do you want to go to the air freshener company with me??' Jamie did not really know what the air freshener company was but she wanted to go somewhere with Fred, so she agreed. Fred fainted. The poor guy had been expecting a 'NO WAY!!' When he came to, Jamie said, 'See you at 5. Oh, and, GET BACK TO WORK.'

"At 5 o'clock sharp (Fred was never late) Fred was ready. He was wearing a new tux and had on girls' perfume. (He thought it smelled better than cologne.) As they were on their way to the air freshener company, Fred asked Jamie if she would like to go out to dinner at a Greek restaurant. She said absolutely. They had a very romantic night.

"Two years later Jamie and Fred were still going out. That night Fred had asked Jamie to marry him. He gave her a really pretty diamond ring. She started to cry and said yes. She hugged him."

I fear that I've run out of space, but will close by noting that Fred and Jamie did indeed tie the knot, with the wedding taking place in New York because "they both hated Tennessee." They honeymooned in Disneyland and Fred "feels like the luckiest man in the world."

I love happy endings, don't you?

It's what's inside that determines gender
Column: A simple hug can bring needed healing
Column: 'Midnight In Paris' a pleasant trip into the past
Hippo-y birthday to Fiona! The popular preemie is turning 1
Obituary: Fred A. Merker