Lest we ever forget: Nasser was only one of 21 in family to survive Holocaust 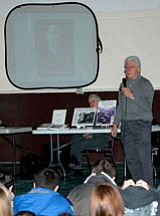 Stephen Nasser speaks to students at Prescott Valley Charter School Friday about his experiences during the Holocaust.<br> TribPhoto/Cheryl Hartz

"A bully is a coward," Nasser said forcefully. "When they gang together, they have a strong voice. They can do nothing on their own."

Nasser explained that the Nazis and the SS used such tactics in WWII to run rampant across Europe and kill some six million Jews - including 20 members of his Hungarian family.

Of the 21 family members the Nazis put in concentration camps in 1944, Nasser alone survived.

The 13-year-old Nasser watched in horror at Auschwitz as Nazi officers goaded and then shot his uncle and aunt and bludgeoned his baby cousin to death. Separated from his mother during the chaos, he never learned what happened to her. His older brother died in his arms in the "Death Barracks" after both of them had been worked and starved to exhaustion.

The dreadful acts and sights he endured - from buckets of bloody gold teeth Nazis pulled with pliers from prisoners' mouths, to the overflowing slop buckets on transport trains, to the stench and greenish haze of fine ashes from cremation ovens, to the living skeletons the prisoners became - Nasser described in detail as students sat silent and wide-eyed on the cold cement floor of their multi-purpose gym.

He wanted the students to understand that although he doesn't discriminate against anyone, he can never forgive the Nazis for the atrocities they committed.

"I have no forgiveness for the SS and the Nazis - zilch," he said, noting he was not talking about German people as a whole. "Not all Germans were Nazis and not all Nazis were German. There were Hungarian Nazis, too. We mustn't forget it. The ones who are guilty will meet their fate at Judgment Day."

His faith sustained him through the ordeal, even though at one point he rebelled against God when the other starving prisoners in Muhldorf, where they had been sent, stripped bare some berry bushes before he and his brother, Andris, got a chance to gather any.

"My brother gave me a shove and said, 'shut up, God works in mysterious ways.'"

The next morning, many of those who had eaten the poisonous berries died in agony.

"I said, 'Dear God, forgive me and please be my best friend for the rest of my life,'" Nasser said. "He saved me several times."

The boys could hear the Allied guns nearby, and Stephen Nasser begged God to keep his brother alive, but Andris' body was too weak to hang on.

Stephen himself weighed only 72 pounds when American troops liberated the camp and found him unconscious under a pile of dead bodies on a train. The SS had tried frantically to evacuate the "evidence."

The diary, crafted from cement bags, he had kept so painstakingly during his incarceration got left behind that day -  April 30, 1945. But he remembered and published the story more than 50 years later in a book titled, "My Brother's Voice."

His message to his audience was that they also must remember.

He asked the assembly to join hands and repeat after him.