Another use for duct tape!
GMHS students tape teachers to raise money for leukemia research 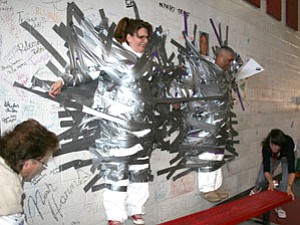 When Glassford Hill Middle School Principal Kristen Rex got tied up with other duties during yesterday's second-hour lunch, math teacher Steve Fonda, left, gallantly took her place on the duct tape wall of fame to help raise money for the Leukemia and Lymphoma Society.

Later on, Rex and School Resource Officer Emelio Rodriguez hung around for a short while after two staff members removed the bench they stood on while students duct taped them to the wall.

Students and staff could buy two strips of tape for $1 in the event called "Stuck for a Buck" that ended two weeks of fundraising.