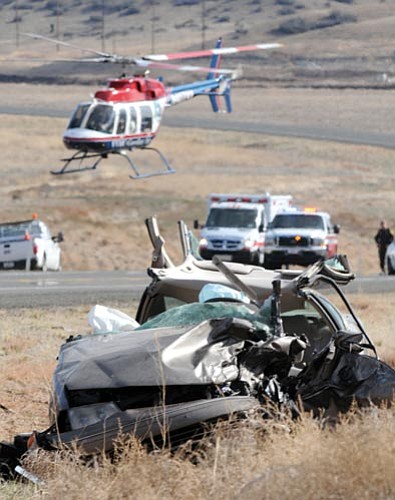 Central Yavapai Fire District spokesman Charlie Cook said paramedics struggled to get the drivers out of each vehicle, including a 60-year-old man, a 44-year-old woman and a 34-year-old man.

Cook added that he did not know the names of the drivers, but each was traveling alone when the accident occurred.

He said the wreck could have been a head-on collision, although he did not know for sure. Each driver was conscious when leaving the scene, Cook said. However, all of them suffered Level One injuries, which means they may have suffered broken bones and internal injuries.

"All three vehicles were spread out over probably 100 yards or so, and all three had heavy damage to them," Cook said. "Two vehicles ended up off the side of the road and one vehicle ended up in the middle of the road."

Yavapai County Sheriff's deputies subsequently closed a three-mile stretch of Fain Road, between Highway 69 and Lakeshore Drive, for at least two hours in both directions.

Cook said a police officer at the scene told him that a broken-down motor home was sitting off to the side of the road, facing northbound on the right shoulder, close to where the accident occurred.

"Two or three minutes later, after the officer pulled off (to the side of the road near the motor home), he heard all this noise and commotion and saw all these cars crashing together," Cook said. "It's unsure whether the vehicles involved in the accident swerved to make sure they weren't close to him (the motor home). Two of them were fairly close to where the motor home was pulled off the road."

A fourth vehicle would have gotten into the accident, Cook added, but the driver drove over an embankment and up the side of the road along an easement to avoid the collision.