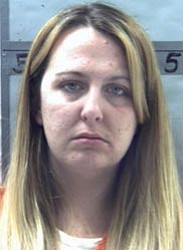 A Prescott Valley woman with her 7-year-old child in the car sideswiped a county deputy's patrol car in the very early hours of Tuesday morning and fled at high speed, deputies said.

A brief chase ensued down Robert Road before Rhonda Jean McCullugh, 27, drove over a culvert into the front yard of a home in the 8300 block of Gary Court, stopping her car just a few feet from the home.

The incident began at 2:30 a.m. when deputies were driving north in a marked patrol car on Robert Road near Dana Drive. As they crested a hill, the deputies saw a Ford sedan coming at them at high speed.

The deputies turned on their emergency overhead lights to alert the driver, who swerved and swiped the front left side of the patrol car, the release said.

McCullugh didn't stop and continued south on Robert Road. The deputies turned around and followed McCullugh's car as it increased speed before turning left and running a red light at Lakeshore Drive.

After the car stopped, deputies smelled alcohol inside it and found the child in the back seat, the release said.

A breath test showed that McCullugh was driving with more than three times the legal limit of alcohol in her bloodstream.

A family member picked up the child at the scene.

McCullugh still was in custody as of Wednesday evening on a $5,000 bond.