Column: A walk in the Valley of the Pharaoh Queen 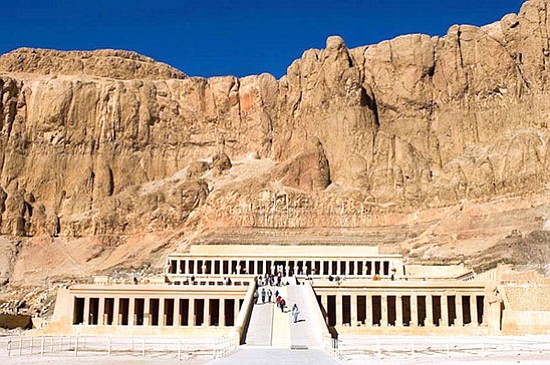 Courtesy photo<p> This temple honors Hatshepsut, Egypt's only woman pharaoh and the first woman ever to reign. The monument, considered one of the finest buildings in the world, is carved into the limestone cliffs of the Theban Mountain.

Come for a walk with me in the early morning. The air is crisp, the sky is blue, the desert is blooming, it could be Arizona. Except to the north you can see the pyramid-shaped peak of the goddess Metsegar - "she who loves silence." The mountain rises up over the Valley of the Kings and guards the tombs of the pharaohs. You are walking in Egypt along the Nile.

Over the mountain spine from that famous valley whose cliffs and caverns have yielded so many treasures lies another valley with another famous tomb. But this one is not hidden underground. Instead it stands uniquely and proudly in its own valley. Its appearance echoes the uniqueness and greatness of the lady for whom it was built - Hatshepsut, Egypt's only woman pharaoh.

Let me tell you the story as it was told to me. It's about eternal beauty, lust, greed, power, blind ambition - all the makings of a Hollywood movie. But it all happened once...in ancient Egypt.

Hatshepsut was a beautiful and charismatic lady in her own right and also the favorite daughter of a popular pharaoh. When the king died in 1492 B.C. (yes, this is a very old story), she declared herself pharaoh, the first woman ever to reign. For a few years she ruled with her half brother and on his death declared herself regent for his small son and became absolute monarch. And no, she didn't share.

She was a master politician and an elegant stateswoman who successfully controlled the most powerful and advanced civilization in the world for twenty years and left behind more monuments and works of art than any other Egyptian queen. And at the peak of her power, she constructed a fabulous funerary temple in the Valley of the Kings, by a soaring plateau at Deir-el-Bahri, across the Nile from Thebes. This is where we are walking this morning.

In the cool, clarity of the Egyptian morning, look around you at this breathtaking monument which is carved from the living rock of the mountain. Built by her lover Senmut (I picture him looking a little like Daniel Craig), the architecture is original and bold and after 3500 years is still considered one of the finest buildings in the world. It is built into the limestone cliffs of the Theban Mountain and rises out of the desert in three huge terraces that are approached by a massive causeway.

It was called Djeser Djeseru or "the most magnificent of the magnificent" by the ancient Egyptians, and I won't argue. The sparseness and discipline of the composition and the integration of the monument with the cliffs rising behind it is not something you will ever forget. Although much has been lost - the Valley Temple, lush green gardens, small chapels, the avenue of sphinxes - are all gone, much remains. And it will leave you breathless.

Walking up the ramps into the Temple itself, there are rich and fabulous reliefs of two ships transporting obelisks from the granite quarries at Aswan. There is a scene of the queen in a boat, fishing and carvings showing her birth from the god Amun. Carved on the walls are details of expeditions sent to the mysterious land of Punt returning with ivory, exotic animals, spices, gold, incense. There are detailed descriptions of the sea journey (led by the chancellor, lover, architect Senmut) and even the reception offered by a bearded African chief and his very hefty wife.

After 4500 years, you can still see vivid colors. Against the azure blue Egyptian sky there are the reds and yellows of a sacred cow, the turquoise of an ibis in flight, the blues, reds and yellows of pharaoh offering gifts to a hawk-headed god. If you can imagine that once you came up a causeway lined by sphinxes, trees and flowers, all in the middle of stern and majestic desert, it must have seemed like paradise.

In one chapel the words are inscribed, "I will make you to be the first of all living creatures, you will rise as king of Upper and Lower Egypt, as your father Amun, who loves you, did ordain." After her death, Hatshepsut name was removed from the obelisks, her face obliterated from the statues. They attempted to erase her from history. But her temple still remains and will stop your heart with its beauty.

Leslie and Mike Ross have owned Kachina Travel since 1975.