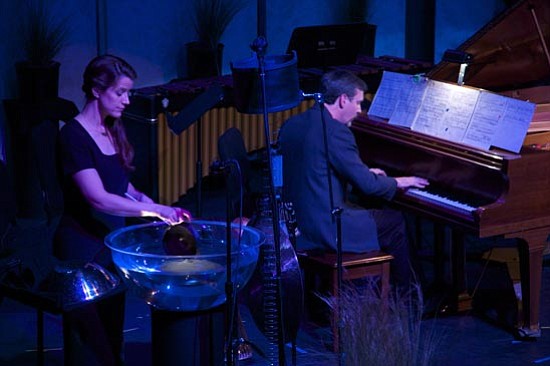 Now in its third season, the Chaparral MusicFest has grown into a major summer event offering an eclectic mix of concerts and opportunities to study with internationally known musicians.

Jazz, classical and flamenco concerts coincide with instructional programs throughout the week beginning Wednesday and continuing with the centerpiece New Music Arizona concert at 3 p.m. Sunday, June 14, at the Elks Opera House.

Accomplished Arizona composers and musicians will perform their own works in the New Music Concert, alongside notable local performers such as The Prescott Women's Chamber Choir and the jazz combo Matt Jackson Trio.

The concert program highlights original works from the featured composers, with other selections influenced by or related to the original pieces in some way.

Grammy-nominated composer Craig Bohmler has won several awards, including first prize in the International Musical of the Year competition for "Enter the Guardsmen," which premiered in London's West End.

Current and former members of the Phoenix Symphony will play three movements from his "Six Pieces After Shakespeare," preceded by "Greensleeves" with Lynn Drye on glass armonica (a series of glass bowls), the Prescott Women's Chamber Choir and Shakespearean actress Tracey Mason.

Local pianist Henry Flurry will perform his "Music for Our Cat Jasmine," while the husband-and-wife tuba and flute duo of Double Play will play Nicolai Rimsky-Korsakov's "Flight of the Bumble Bee," a piece that inspired Flurry's work.

"This is the first year we've had so many composers in town," said Flurry, who started the festival with her husband, Henry.

A special flamenco duet by Chris and Lena Jácome follows that concert in the Elks at 7 p.m.

Chris Jácome scored two songs for the film "Amreeka," which debuted at the Cannes Film Festival on May 20.

"He brought down the house last year. That's why we brought him back - with his wife," Flurry said.

The Sabaku Quartet, string musicians from the Phoenix Symphony and Arizona Opera Orchestra, start the series off with a free concert at Trinity Presbyterian Church at 7 p.m. June 10.

Ticket buyers for other series events can donate tickets for music students otherwise unable to go.

For ticket prices, dinner and show packages and other information, visit www.chaparralmusicfest.org.