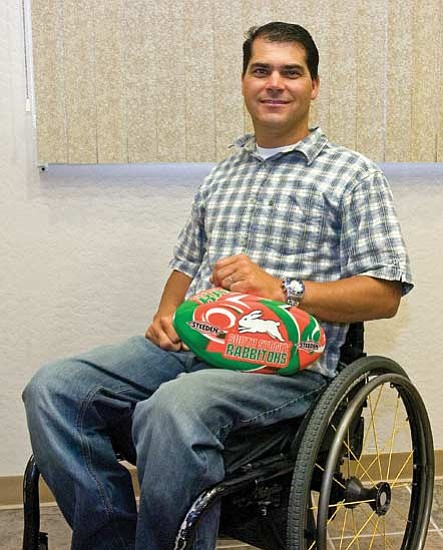 Matt Hinshaw/<br>The Daily Courier<br>Robb Martin rests his arm on a rugby ball that he brought home from his month's stay in Australia where he participated in a Group Study Exchange sponsored by the Rotary Foundation of Rotary International at the Daily Courier office in Prescott Wednesday afternoon.

Prescott resident Robb Martin scattered myth to the winds during his month-long visit to Australia earlier this year.

He kayaked. He went scuba diving. He deep-sea fished. He went sailing. And, probably most exciting, he and his team reached the top of Mount Kosciuszko, Australia's highest mountain at 7,310 feet above sea level - a feat their escort said was a first.

Martin accomplished all of this despite being in a wheelchair because of an off-road-vehicle accident in 2005. He traveled to Australia as part of the Rotary Foundation of Rotary International's Group Study Exchange program, and his trip was also unique because it was the first time the exchange program invited individuals who are all confined to wheelchairs.

Don Schiller, a member of Sunup Rotary in Prescott, chairs the club's District 5490 GSE program. For 30 years, the foundation has provided grants for teams to exchange visits between paired areas in different countries. GSE focuses on young professionals and offers them the opportunity to study their vocations in other areas and gives them a cultural experience, at the same time.

Martin was one of five from Rotary District 5490 - the other four men and women were from the Phoenix area. Australia sent four team members to this district. Martin's "great personality, good attitude, good background and his position" won him a place in the program, Schiller said.

Martin, 34, is a communication specialist for the Prescott Police Department and works in the dispatch center. The Prescott native and 1994 Prescott High School graduate began his career with Prescott police as a patrol officer in 2002, but that changed in 2005, when the accident paralyzed him from the waist down.

"You either sink or you swim with something like this. You just get up and go," Martin said, and when Rotary chose him for the program, he seized the opportunity to visit a country he had always wanted to see.

The commitment to meet his vocational counterparts in Australia took him to a New South Wales police station and to a district courthouse where he sat in on a murder trial. He had tea with the judge in the 1865-era courthouse, and he found the old English wigs and robes that both judges and lawyers wear fascinating.

"So many things impressed me," Martin said of his journey to the land Down Under. He characterized his experiences as "amazing" and the Australian people as "nice, and very inviting."

The trip reflects Martin's creed to "live life to the fullest no matter what your disability is." "Everyone has a disability - some are seen, some are not seen," he said.

The climb up Mount Kosciuszko was a highlight for Martin. He and his Phoenix companions rode adaptable, hand-propelled mountain bikes and made the trip in six hours. Their guide, Martin said, said they were the first disabled group to ever make it to the top unassisted on their bikes.

"In general, we surprised everybody by the things we accomplished - to show them we could do anything anyone else could do," Martin said.

Sunup Rotarian Mike King and his wife, Mary, hosted Australian Jenny Kapp, who is a freelance educator and writer and is currently working toward a master of education degree.

For King the experience of hosting Kapp and driving the exchange team on its various excursions was "profound." He applauded the Australians' "great sense of humor" and noted, too, that "they are great contributors to their community. They have great intellect and are great to be around," he said. "I'm in awe of their stamina and their quest to learn."

India is the next destination for a GSE team. Now that the door is open, Schiller hopes to attract both the able and disabled. Interviews will begin July 11. For more information, contact John Stewart at 928-445-1786 or e-mail him at johnnlump@msn.com.