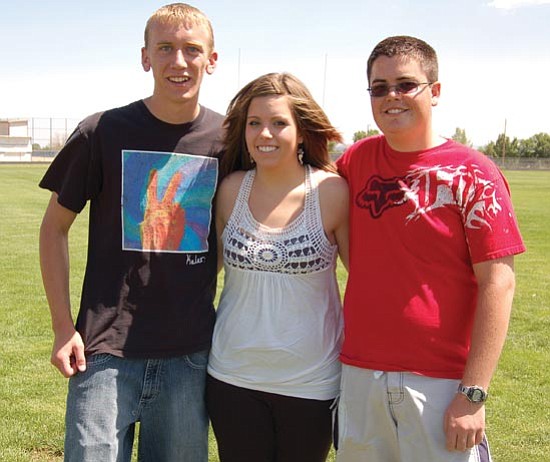 Chino Valley High School's top three students said being at the top of their class was a four-year goal come true. And unlike a lot of the nation's Class of 2009, all three seniors attended CVHS all four years.

They and the other 144 graduating seniors in their class will graduate in the CVHS football stadium 7 p.m. Thursday.

David Sexton, 18, a native of Prescott, said he attended school from kindergarten through the 12th grade in schools in the Chino Unified School District.

He said being one of the class' two valedictorians with perfect 4.0 grade point averages is "a symbol of hard work and keeping with it during the past four years."

His favorite class in high school was mentorship. "It was fun. I had a good group of kids to work with," Sexton said.

This fall he plans to major in mechanical engineering at Brigham Young University in Provo, Utah.

The other valedictorian in CVHS's Class of 2009 is 18-year-old Brent Simpson.

"Being one of the valedictorians is a great honor I have worked toward for four years and actually achieved," he said.

A native of Phoenix, he moved to Chino Valley with his family when he was in the seventh grade.

His favorite class was calculus. "It was a small class of my friends. We could be ourselves," he said.

This fall, Simpson plans to major in microbiology at Arizona State University in Tempe. He wants to become a pediatrician and have his own practice.

"It was always a goal of mine to be able to speak at my graduation, and I achieved it," she said.

A native of Santa Clara, Calif., Catanzariti moved to the area with her family when she was in the eighth grade.

Her favorite class at CVHS was trigonometry because her teacher was so enthusiastic.

This fall, Catanzariti plans to major in nursing at Northern Arizona University in Flagstaff. She aims to become a search and rescue nurse.

Top of their class
Editorial: CVHS graduation the best of the best
Perseverance, venturing into the adult world
End of an era for Chino Valley High School's top grads
Sixteen-year-old top senior at CVHS