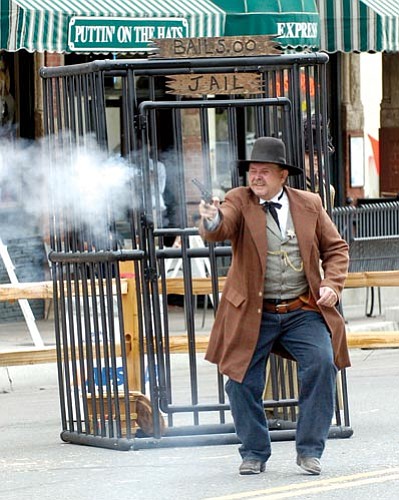 The Daily Courier/file photo<p> Jim Wells (alias Siringo) of the Arizona Ghost Riders re-enactment group shoots it out with villains during the 2007 Shootout on Whiskey Row.

Award-winning Western re-enactment groups from Arizona and across the Southwest will converge on South Montezuma Street in downtown Prescott this weekend for the fourth annual "Shootout on Whiskey Row."

Members of the Prescott Regulators and Their Shady Ladies, a local non-profit organization that sponsors the shootout and serves as Prescott's official "Old West Ambassadors," say they will once again "make cowboys, gamblers, outlaws and wild women of the West come alive."

Admission is free to get into the shootout, which goes from 9 a.m.-4 p.m. on both Saturday and Sunday and celebrates the National Day of the American Cowboy.

During the shootout, participating groups gather on Whiskey Row to re-enact Old West gunfights and other historic events in a competition for cash prizes.

Folks also can enter "Arizona's largest period costume contest," which requires authentic 1880s clothing, and vendors will be on-hand selling period items. Young buckaroos will have the opportunity to try their luck at calf roping and stick horse racing.

The main goals of the Regulators are to generate money for local charities and non-profit service organizations while seeking to preserve Prescott's Western heritage.

For more information about the Shootout or to become a sponsor, call George Ranz at 771-2161 or log on to the Regulators' website at www.prescottregulators.org.