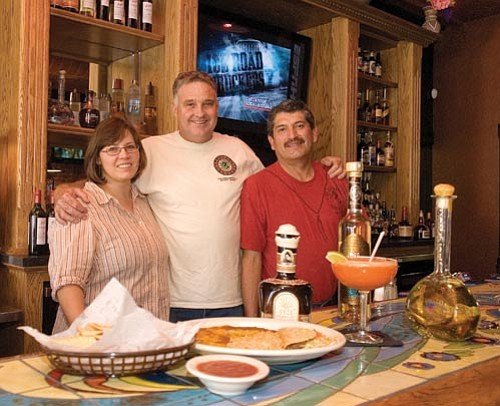 Gary Denny's mom used to tell her son that when things get bad, throw a party.

In the midst of a bad economy, that's exactly what restaurant owners Denny and Gill and Sandra Singh are doing.

In the case of Denny, it means adding the Cantina Mañana to his downtown restaurant.

For Gill and Sandra Singh, their big bash is making a big splash in downtown Prescott.

The Singhs are moving their Taj Mahal restaurant from Frontier Village to the shuttered N'awlins space.

Gill and Sandra are preparing to move into the 5,800-square-foot building and roughly double their seating capacity in the process.

"We're not doing so bad in our other location considering the economy - why can't we do better here?" Sandra said. "We could be so much bigger and better, so why not go for it? We think we have the best Indian food in Arizona."

The advantages of moving include a bigger building, nice patio space and better visibility.

It was a move Singh said they began considering in April 2008 and again this past May, which led them to sign the lease in June.

"The timing was just right," she said.

That's a view that a local business broker shares.

Harron said that means it's a good time for restaurants to expand, as the challenges owners are facing now aren't any different than what they always were.

"All of my contacts in the downtown tell me that they are extremely pleased with sales results for the spring and early summer months," he said. "Some have told me their sales are right back where they were one year ago, and several are experiencing gains versus a year ago."

Singh said the menu will remain the same, and they will also continue to offer a lunch buffet, a vegetarian/vegan buffet and belly dancing entertainment when they open the new restaurant later this summer.

Just a few feet up the sidewalk, Denny recently opened the cantina, which is an expansion of his El Charro Restaurant.

Denny said Sophie Brambila originally opened the restaurant at 120 N. Montezuma St. in 1959. Kurt and Ronda Mann eventually bought it and ran it for many years before Denny stepped in and buying it from them nine years ago.

Denny remembers eating at the restaurant when his brother was born and for other milestones over the years.

The cantina boasts multiple big-screen televisions and serves as a place where people can come have a drink and something to eat.

And that's exactly what the goal was, according to General Manager Amanda Cordoba.

"We just want people to come and feel they have a connection here," she said.