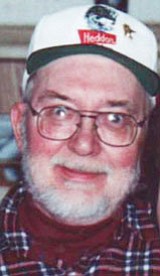 David was a veteran and served in the United States Navy from 1951 to 1955. After his military service, David attended college and graduated from the University of Vermillion, S.D. with a degree in Journalism.

In Aug. 1984 David married Patty (Meyers) and in 1988 they moved to Prescott Valley from Phoenix.

David felt as if he had come home because he loved this area so much.

He is survived by his loving wife Patty; his daughter Shannon of Scottsdale; a brother Larry of Glendale; and a sister Diane DeHamer of Chino Valley and many nieces and nephews.

David will be remembered for his great sense of humor and making everyone laugh. David's passing has left an emptiness in our lives, he is this world's loss and heaven's gain.