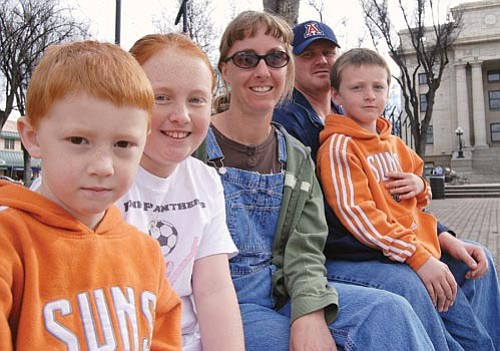 Although Arizona became one of the last states to recognize Martin Luther King Jr.'s birthday formally as a national holiday, many Prescottonians support the civil rights movement that King died for in 1968.

An assassin murdered King on April 4, 1968, at the Lorraine Motel in Memphis.

Nine-year-old Kendall Schwartz cannot define prejudice, but she knows it when she sees it: "It's wrong."

Maine native James Croteau rarely saw a black person until the U.S. Navy shipped him to Norfolk, Va. "I had never seen 'White Only' and 'Colored Only' water fountains."

Tom Rhone risked trouble at the age of 4 when he darted to taste some "White Only" water to see if it tasted better than his "Black Only" water. "It tasted like the same water."

"I really think it was an amazing thing when the country voted to have Martin Luther King Day," he said while taking a break from his job at Kendall's Famous Burgers in Prescott. "I think it put a vision in the minds of people of things yet to come."

"When they made King's birthday a holiday, it proved that we are the greatest country in the world and that we can overcome anything," he said. "And with Obama we double it."

Prescott High School freshmen Giovanna Navarro and Sierra Sterling said they have not studied the civil rights movement in school, but they know about Martin Luther King Jr. and what he did for civil rights.

"I think it is important because he helped shape society the way it is today," Sterling said.

Navarro said that she thinks students' perceived "racist" behavior is actually because of cultural differences and not because of race.

"Martin Luther King stuck to his guns and advocated changing peacefully and not with riots," Croteau said. "Christians are supposed to turn the other cheek. I can't imagine how many little black children he helped by setting an example."

Croteau said that he fought side by side with black soldiers in the Vietnam War and that "blacks died in large numbers in Vietnam." He has many black friends he calls "brothers" in the Prescott Veteran's Hospital.

It bothers Rhone that many young people do not seem to understand the struggle and history behind Martin Luther King Day.

"A lot of young people will use this day to drink or get destructive, but that is not what King stood for," he said. "King followed the peaceful ways of Gandhi."

Rhone said he "cried like a baby" when Obama won the Democratic nomination. "I never thought I'd see it in my lifetime," he said.

Tricia Schwartz, Kendall's mother, watched King's "I have a dream speech" and was startled when she read the date that he spoke it to the nation - Aug. 22, 1963.

"That was not very long ago, only 45 years, but it seems like it was a lifetime ago," she said.