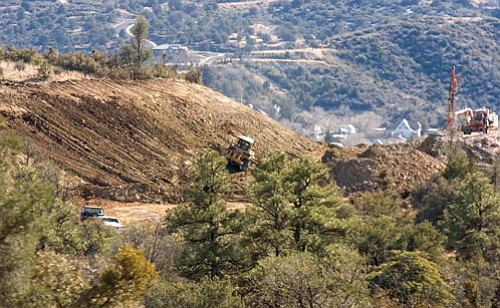 Matt Hinshaw/The Daily Courier<br> Contractors clear an area where the Yavapai-Prescott Indian Tribe plans new housing on its reservation next to Prescott.

The Yavapai-Prescott Indian Tribe plans to build a connector road that will shorten the cutoff route for southbound Highway 89 drivers trying to get to Highway 69.

New housing also is in the works for the tribe in 2009.

The tribe's contractor already is building a new bridge for the tribal connector road across Granite Creek next to Highway 89 and the Sundog Ranch Road turnoff. Tribal officials hope to finish the bridge by the end of this year, the tribe's General Manager Jim Noe said.

The tribe hopes to start construction on the connector road within a few months and finish it by mid-2010, Noe said. That road will connect the bridge to Highway 69 across from the Target store.

The process of getting federal approvals and grant money took tribal officials much longer than they anticipated, Noe said.

The tribal connector will make a shorter trip for people who want to drive from Highway 89 to the tribe's Frontier Village mall, its Prescott Resort and its two casinos on the western edge of Highway 69. That's one reason the tribe always planned to build the connector, Noe said.

Vehicles also can access the mountaintop resort and its casino from a relatively new road that cuts directly off Highway 89, although the main resort access is off Highway 69.

Tribal leaders also hope the new road will encourage development of the tribe's business park near Sundog and Highway 89.

The tribe has a permit to connect the future tribal connector to Highway 89 but still needs one to connect to Highway 69, said Dallas Hammit, Arizona Department of Transportation (ADOT) district engineer.

A Federal Highway Administration grant is contributing $3.7 million for the bridge. The tribe also is hoping to get ADOT help on the road.

The Yavapai-Prescott Tribe also is building a new housing area for tribal members on its reservation, which, basically, is surrounded by the City of Prescott.

The plan calls for 28 home sites.

"They're definitely in need of housing for tribal members, so this has been something the tribe has wanted to do for a long time," Noe said.

A contractor started cutting a road into the site from Ruth Street across from the Prescott High School in September, but then had to stop until December because workers hit an archaeological site, Noe said.

The lots should be ready for development by this fall, he said.

In the past, tribal members have built their own homes on the reservation but the tribal board of directors has not yet decided how the process will work this time, Noe said.

The new housing will connect to other roads on the reservation, so the board has not decided whether the Ruth Street connection will be a regular or emergency access, Noe added.

The tribe also has long-standing plans to build a cultural center next to the Prescott Resort where it cleared a level spot in 2006, but it has no schedule for that work yet, Noe said.

The tribe has no plans for changes at its mall or casinos, Noe said.