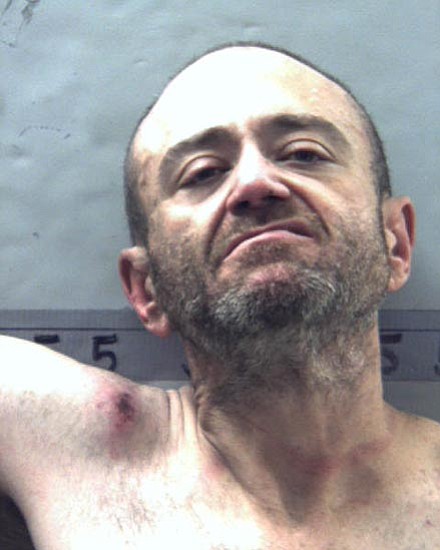 The incident happened just before 7:30 p.m., the release said, after Russell Allen McGie confronted a woman sitting in her vehicle and accused her of playing rap music. The woman told McGie another vehicle was playing the music but he accused her again and pulled a gun from his belt and pointed it at the woman, witnesses told police.

The woman ran inside the gas station store and an employee phoned police.

Meanwhile, McGie loaded a magazine into his gun and chambered a round, police said. He then ended up on the ground reportedly pointing the gun at another man who was coming to the store, witnesses said.

The man kicked the gun from McGie's hand and, with the help of another onlooker, held McGie on the ground until police arrived, the release said.

Officers said McGie was combative and verbally abusive even after they handcuffed him.

Police arrested McGie and booked him into Yavapai County Jail on charges of four counts of aggravated assault, eight counts of endangerment and one count of disorderly conduct with a weapon. All of the charges are felonies, police said.

Officers went to McGie's home and learned he had been drinking and was possibly intoxicated. They found a 12-gauge shotgun and a machete-style knife and seized them for safekeeping, the release said.

Police said in the release that it's important for the public to know that when police arrive on the scene of a crime it is sometimes difficult to tell the difference between the suspect and the victim. Therefore it's important to immediately obey police commands to help ensure the safety of everyone, especially when weapons are involved.