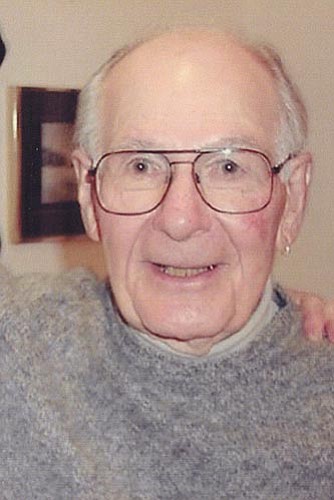 Dr. Frank Leslie Parsons Jr. passed away on Jan. 27, 2009, at age 91 while living in Prescott, Ariz. Frank was born in Clay, Ky., on May 9, 1917, to Dr. Frank Parsons Sr. and Sarah Jane Parsons and moved to El Paso, Texas, at the age of 2, where he lived until moving in 1988. Frank was a prominent dentist in El Paso for 44 years, following in the footsteps of his father, who was also a dentist in El Paso. Frank was known to his patients as "Painless Parsons" and retired from dentistry in 1987 after a very successful career. After what Frank referred to as "a hell of a ride," he lived a life of adventure, traveling the world and doing things that most people would never even consider. His motto was always to live life to its fullest - which he did, every single day of his life.

After graduating from Austin High School in El Paso, Texas, Frank attended the University of Texas El Paso. He then attended the University of Texas (Austin) and, upon graduating with his B.S. degree, was accepted into and completed Baylor School of Dentistry in Dallas, Texas. After receiving his Doctor of Dental Surgery, he served in the U.S. Army as both a dental oral surgeon and dental officer, serving in four campaigns during World War II, and was a recipient of the Asiatic Pacific Theater Ribbon with Two Bronze Service Stars, World War II Victory Medal and Philippine Liberation Ribbon, and later served in the U.S. Air Force Reserves.

Frank's dental career was nothing short of exceptional. While spending his 44-year dental career in El Paso, Texas, he had many accomplishments including becoming the first president of the Academy of General Dentistry of the Southwest and longtime member and past president of the El Paso Dental Study Club. Frank also became a dental consultant in crown and bridge for both the Dental Corporation at William Beaumont Hospital and the Dental School of the University of California and later a dental consultant in fluoride research with Schellanger Research Laboratory for the University of Texas, El Paso, and board member of the first national meeting of Preventative Dentistry in Chicago.

Frank accomplished nothing short of perfection! He always strived to 'try everything at least once' and came close to achieving that goal in his 91 years. Frank was an accomplished artist, having been mentored by prestigious artists Peter Hurd and Howard "Lincoln' Fox. He attended the University of Texas (El Paso) Fine Arts Department, Art School of New York, studying under Frederick Taubes, and El Paso Art Academy studying under Robert Hedley. His paintings have been shown in studios throughout the United States and abroad. Frank loved to express himself and his love of nature through his art, his favorite and best-known medium being egg tempura.

Aside from painting, Frank was an avid car racer, participating with the Sports Car Club of America, and enjoyed Formula Sports Car racing where he continued racing until he reached the age of 67. Frank was a licensed pilot of single-engine fixed-wing planes, hot air balloons and gliders. Always an adventurer, Frank loved life and nature to the fullest and enjoyed a variety of hobbies including model railroading, kayaking, sailboat racing, hunting, fishing, birding, photography, and traveling the world. Frank was a member of the El Paso Kiwanis Club and "Los Viejos" and later was involved with the local Prescott Chapter of the Audubon Society, devoting time to wildlife habitat improvement.

A tremendous athlete, Frank participated in baseball, swimming, diving and golf, having received a golf scholarship while attending the University of Texas. His athletic tendencies followed him throughout his life during which he continued to workout two hours a day until age 88, when he was diagnosed with Alzheimer's disease.

Even then, his optimistic, happy nature remained.

Frank's remains will be cremated and dispersed per his wishes by the family. A Celebration of Life will take place on March 21, 2009, from 2 to 4 p.m. at Las Fuentes Retirement Community, 1035 Scott Dr., in Prescott, Ariz. In lieu of flowers, contributions may be made to Adult Care Services, 844 Sunset Ave., Prescott, AZ 86305, in memory of Dr. Frank Parsons. This facility provided exceptional care to Frank and support to the family throughout the past year.