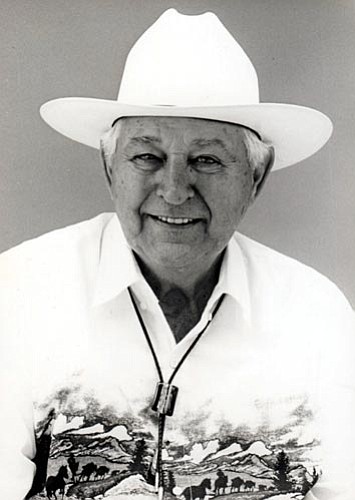 A singer-songwriter, artist, World War II veteran, successful businessman, antiques collector and community leader, Ted had a rich and fulfilling life, wearing many hats. But it was donning a cowboy hat in his beloved Prescott that truly made him happy.

Upon meeting Ted you were struck by how larger than life he was, and not just because he stood 6'2" without his Western boots. His quick wit and dry humor would reveal themselves right away when you said "Nice to see you" and he replied "It's nice to be seen." Another of his favorite expressions was "It's all just a part of being wonderful," said with a grin and a wink. It summed him up beautifully.

Ted was born June 17, 1922, in Emporia, Kan., one of 10 children born to James Alton and Rhoda Mae Edmundson. The family moved to Prescott in 1929 when Ted was six years old. They were seeking the better air quality Phoenix offered for his mother, but when they arrived in Prescott, they thought they'd died and gone to heaven. His dad, being a carpenter, got a contract to lay wood floors in 49 homes in Jerome, so they stayed in Prescott.

His early success as a singer, songwriter and guitar player took him to Phoenix, where he forged a close friendship with legendary Steve Allen. Together they were mainstays on Phoenix radio in the 1940s with their program, "The Ted and Steve Show."

Ted served his country with the Coast Guard in WWII, and was on the USS Etamin off the coast of New Guinea when it came under enemy Torpedo fire on May 27, 1944.

Ted returned from the war and painted billboards for Foster and Kleiser throughout Phoenix in the 1940s and '50s. The faces of the pretty girls in soda and car advertisements were often modeled after his first wife, Willie Lee. She died when their two daughters were still in elementary school.

In 1956 he married Louise Brown, who became a new mother to his little girls.

In the mid-1960s he became Vice President of Community Affairs at Eller Outdoor. Ted was also President of Downtown Kiwanis.

The couple returned to Prescott when Ted retired in 1979. Ted was involved in his community and truly enjoyed joining the Smoki and singing and performing for the Sharlot Hall Museum. He also sang at Cowboy Poets in the summer.

In lieu of flowers, memorial donations may be made in Ted's name to Hospice Family Care, 100 Sheldon, Prescott, AZ 86301.