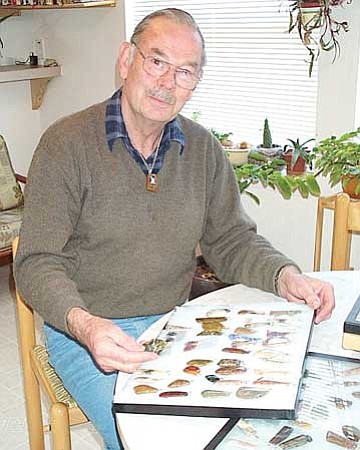 Whether they are finding shiny black obsidian, multi-colored agate, reddish jasper or crystal quartz, rockhounds are fascinated by rocks of all kinds.

John McArthur of Chino Valley is an avid rock hound, in fact he is presently the field trip leader for the Prescott Gem & Mineral Club.

John became interested in rocks after moving to Arizona from New York with his wife, Gillian. He's originally from New Zealand and immigrated to the United States in 1968.

"We started going on Jeep trips after we moved here and finding some very interesting rocks. A friend of mine told me about the gem club, so I joined and started going on their field trips. Recently we went to Bloody Basin and went to the old Arizona agate mine," John said.

John loves the surprises a rock can bring to its finder.

"One of the biggest thrills I had was picking up what looked like a nothing rock, then cutting it with a diamond saw and seeing the beautiful designs and colors inside," he said.

It's a hobby that gets John moving and involves sightseeing at the same time.

"Rockhounding is fascinating because it enables you to get exercise, be with interesting people and see our beautiful state," he added.

John enjoys finding and polishing beautiful rocks, but soon discovered he wanted to do more with them. So he started taking a lapidary and a jewelry making class at Yavapai College. He is now very skilled at creating beautiful pieces of jewelry such as rings, necklaces, earrings and so on.

"Every year the college has an art show and they will only pick a couple of pieces from each art category to display. Every semester I have had at least one of my pieces admitted to the show. It feels good to know I have the techniques down," John said.

"The high point in doing this was winning the lapidary category," he said. "It makes me feel like my art work is appreciated by others."