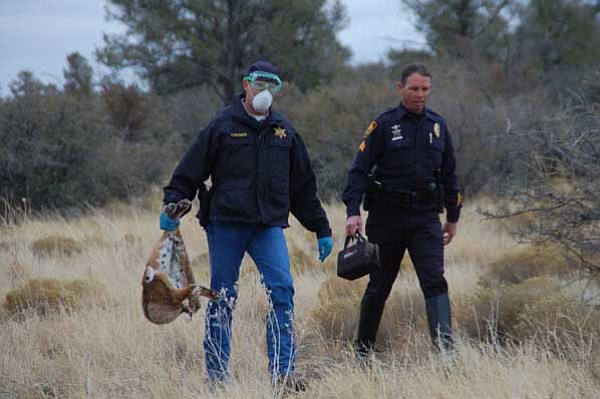 PRESCOTT - Prescott police shot and killed a bobcat in the Prescott Lakes subdivision Wednesday morning that they suspect was rabid.

The incident comes at the end of a year with a record number of wildlife rabies incidents in Arizona, with 16 cases in Yavapai County. The Arizona Game and Fish Department reported that Yavapai County had eight cases of known rabies in foxes and three in bobcats.

Prescott police and City of Prescott Animal Control officers Wednesday morning went to search the area across the street from The Cottages subdivision near The Daily Courier newspaper office. While they were checking along the parkway, they saw a bobcat walking toward them.

The cat eventually walked into a wooded area near Prescott Lakes Parkway and Willow Lake Road. Police and animal control officers followed the cat and found her sitting near a tree.

Fletcher said that he decided to shoot the cat because it showed abnormal behavior by roaming in daylight, not showing fear of humans, and it appeared sickly, which are symptoms of rabies. No one could be sure if it is the same bobcat that attacked cars the night before, but based on the cat's behavior and the fact police found it in the same area, it is likely the same one, Fletcher said.

Officer Jeremy Brazell got within 15 yards of the cat and killed it with one shot from an AR-15 rifle.

"We decided that was a safe place to do it because we had a good backdrop and it is in an unpopulated area," Fletcher said.

Scott Poppenberger, of the Arizona Game and Fish Department, said that he would send the carcass to a lab for "disease testing." Poppenberger said that he should know the test results in about 24 hours.

"The good thing is, as far as we know it had no known exposure to people or other animals," Poppenberger said. "But, we need to determine if it is diseased based on its behavior and because it exhibited a number of signs that it is diseased."

Poppenberger added that bobcats are a "high risk for rabies" because of their interaction with other wildlife.

The most recent case of a rabid bobcat encounter, and one of the most dramatic, occurred mid-December about four miles from Castle Hot Springs. James Gruver strangled to death a rabid bobcat after it lunged from under Gruver's sand buggy trailer and attacked him.

"People need to realize that we live in a rural area with a lot of wildlife around," Fletcher said. "It's one of the reasons that we live here, but we have to remember that they are wild animals."