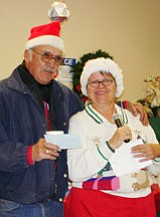 On Saturday, Dec. 19 the Community Center at Cordes Lakes was abuzz with Christmas activities.

It all started with the Electric Lights Parade with many floats, ATVs, and various vehicles all decked out for the holidays. The local Volunteers in Protection Sheriff's vehicle led the parade of more than 15 other vehicles. The Mayer Fire Department vehicles brought up the rear, until they had to leave about three-fourths through the route to respond to a call.

This year a first and second prize were up for grabs. The Community Bible Church float took second and Leo Motorsports brought home the first prize with their elaborate tow vehicle and revving race car behind it. Congratulations to Mary and Larry Seppela and Ralph Byers.

The parade entrants then converged on the Community Center where Mr. and Mrs. Claus were busy taking orders for Christmas and the children were smiling while having their picture taken with Santa.

There was no waiting in line, as the tables had foam cutouts of gingerbread men, snowmen, and other holiday figures, along with all of the trimmings from ribbons and hats, to stars and scarves.

The children were busy making their own creations with the items in the basket. Two-year- old Jade was totally concentrating on her snowman, under the watchful eye of mom.

Trays of cookies filled the groaning table, along with coffee, hot tea and hot chocolate with whipped cream. The hot drinks were a hit with the cold float riders, although the weather was cooperating. The 20-mph afternoon wind had dwindled by parade start time.

Cordes Lakes Cora ambled around with her white fur-trimmed red skirt and cape. She wore her angel wings and visited with everyone. Cordes Lakes Cora is not really one individual. It is a community coming together to provide fun events, friendship, assistance to those in need, great meals and more. "She" is the people who run the food pantry, the angel tree, keep the community center building open and maintained, coordinate the Spring Ladies Luncheon and other fund-raising events, give their time to the Friends of the Library, the American Legion, and Love Ministry.

The Cordes Lakes Choraliers played the piano and sang during all of the evening's activities. Many sang along with the familiar songs, and enjoyed listening to those less familiar.