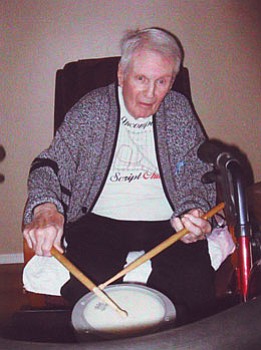 At the age of eight, George started drumming lessons. His drumming was a big part of his life until his passing.

After high school, George enrolled at The Ohio State University in Columbus, Ohio. He was a proud member of the Ohio State marching band as a drummer for four years. His favorite march was the "Incomparable" Script Ohio, one of the most famous and beloved marches in the history of college sports.

After completing his second year at OSU, he was called to serve his country in World War II. He spent his service time in the South Pacific, in and around New Guinea as a member of the 124th Infantry, Cannon Company. George obtained the rank of Sergeant. At the end of the war, George returned to The Ohio State University and again joined the marching band. He graduated with a bachelor's degree in business.

In 1947, George married the love of his life, Kathleen Mary Andrews, and raised three sons, Robert, Mark and Peter. Kathleen passed away in 2003.

In the early 1950s, George became a police officer in the beautiful city of Worthington, Ohio. Starting off as a "prowl car" officer, he quickly earned his way up the ladder as he reached the ranks of sergeant, lieutenant, captain, and acting police chief. After his police work, George was hired as Worthington's first finance director. Three years later, he was appointed Worthington's City Manager by the city council. After 10 years, he was offered the City Manager's job in Washington Court House, Ohio, where he finished his career in public service.

George was a member of the Aladdin Temple Shrine of Columbus, Ohio. He played his drums proudly in the temple's jazz, Dixieland and marching bands, along with the orchestra. He was also a 50-year member of the Masons.

A celebration of George's life will take place in Columbus, Ohio, in January 2010.

In memory of George, the family asks that donations be made to Hospice Family Care of Prescott.

"March on dear father; march on, as your drum will always be heard from heaven."