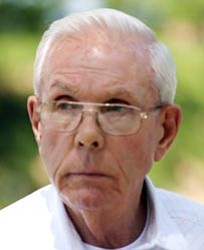 Ben graduated from high school in Harris, Iowa, in 1951 and later went on to Iowa Lakes Community College (Emmetsburg, Iowa) and the University of Iowa (Iowa City, Iowa). Ben served his country in the U.S. Air Force from January 1953 to January 1957. He was stationed in Duluth, Minn., and North Africa. In 1955, Ben married Jan Weaver. They had four children, Mary Ann (Mark) Lockey of Box Elder, S.D., Lonnie Ben (Kathy) Saunders of Okoboji, Iowa, Kimberly Jo (Bryan) Harken of Spencer, Iowa and James John (Kari) Saunders of Des Moines, Iowa. His career was in local government as mayor of Arnolds Park, Iowa, and chief of police and city administrator of Okoboji, Iowa. In 1981 Ben married Kathleen (Kathy) Ross of Spirit Lake, Iowa. To this marriage, many pets came along with it. Ben retired in 1996. He received many awards and recognitions throughout his lifetime. He was an active participant in numerous projects, community organizations, the Arnolds Park, Iowa Methodist Church, Citizens on Patrol with the Prescott Police Department and the First Church of the Nazarene in Prescott. He always had time for others and went beyond the call of duty.

Ben loved coffee with his family and friends, particularly his soul mate and wife, Kathy. He had a ready smile and was always willing to lend a helping hand. Who can forget his sense of humor?

He was an avid outdoorsman, especially fishing, gold-panning, gardening, kayaking, hiking and bicycling, and he enjoyed reading and collecting firearms. Ben lived most of his life in northwest Iowa and a short time in Rohnert Park, Calif., moving back to Iowa and then on to Prescott, Ariz., in April of 1998.

A Celebration of Life will be at 2 p.m. Tuesday, Dec. 29, 2009, at the First Church of the Nazarene on Willow Creek Road in Prescott. In lieu of flowers, the family asks that donations be made to the Friends of the Nazarene or the Yavapai Humane Society.