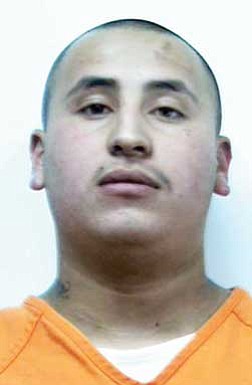 Prescott Valley police arrested two men Monday on burglary charges after an officer on patrol found the door to a beauty salon kicked in.

Police booked Antonio Gamez, 19, and Alex Garcia, 18, both of Prescott Valley, into the Camp Verde jail on one count of burglary to a commercial building, three counts of burglary to a vehicle, and four counts of criminal damage.

Another officer arrived and they both found broken mirrors and other damage inside the business near Hoffman and Loos, said Sgt. Brandon Bonney, public information officer and crisis negotiations supervisor for the Prescott Valley Police Department.

As detectives began their investigation, the officers found blood evidence and shoe prints on the dark-colored floor and followed the tracks outside to a residence in the 4300 block of Parent Road where they interviewed people, Bonney said.

While at the salon, officers learned of three vehicles burglarized in the Boys and Girls Clubs parking lot with broken windows, missing property and evidence that the burglaries were related, Bonney said.

Gamez and Garcia admitted involvement when officers confronted them with evidence, Bonney said.