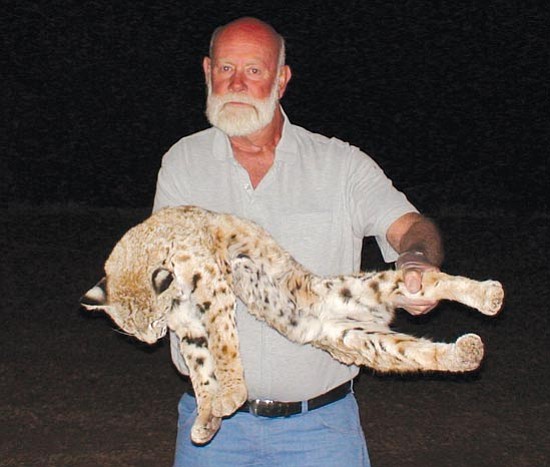 Courtesy photo<br>James Gruver holds the rabid bobcat he strangled to death when it attacked him at his remote home north of Castle Hot Springs Dec. 14.

A rural Yavapai County man strangled a rabid bobcat to death this past week, topping off a bizarre series of local human encounters with rabid wildlife in 2009.

It's no surprise that Arizona wildlife officials counted a record number of wildlife rabies cases this year at 250, shattering the previous record of 176 set in 2008. That number included 44 cases of human exposure and 157 cases of pet exposure to rabies.

The Arizona Game and Fish Department reported 15 cases of known rabies in wild animals in Yavapai County, with eight in foxes and three in bobcats.

Wildlife officials haven't found any explanations for the huge increase, except that rabies generally runs in cycles and more people are living in Arizona than ever before.

The most bizarre encounters have been in Yavapai County.

At least seven Yavapai County residents suffered attacks by rabid bobcats and foxes this year near Prescott, in Cottonwood and now in the Castle Hot Springs area.

James Gruver was taking his sand buggy off his trailer at his remote home about four miles north of Castle Hot Springs in southern Yavapai County Monday afternoon when he heard growling under the trailer.

Thinking it might be one of his cats, he leaned under the trailer and quickly found out it was a different kind of cat - a wild, rabid bobcat.

"It was just giving me a stare that just gives you a chill," Gruver said.

Before he had time to react - his gun was only six feet away - the bobcat lunged at him and knocked him onto his back on the ground as he tried to shove it away.

With the insane bobcat's jagged teeth only about 18 inches from his face, Gruver instinctively grabbed it around the neck to keep it from biting right into his neck. He knew only a rabid animal would attack him like that.

"There for a few minutes, it was just ripping me apart," he said. "Claws were flying everywhere."

As he tried to strangle it, he got up onto his knees and then put a knee down on its ribcage to hasten its demise. Within a minute, it stopped struggling.

State wildlife officials praised Gruver for killing the bobcat before it had a chance to attack others.

Since the bizarre incident, Gruver has faced a barrage of media interviews, most recently on the national Fox News TV channels.

Gruver drove down to Phoenix one day to provide interviews to all the local TV stations. Some outlets have made him out to be a powerful, tall, strapping guy, listing his height at 6 feet 8 inches tall. But the 61-year-old Gruver says he's more like 6 feet 1 inch tall, and he's disabled because of serious back problems. He attributes his actions to pure adrenaline.

"I'm not the strong man everybody is making me out to be," Gruver said.

He found out the hard way that he had to get rabies shots from the scratches even though he kept the bobcat from biting him.

Luckily, Gruver had a heavy shirt on, or his arm wounds could have been a lot worse. The series of rabies shots in his wounds hurt a lot more than the wounds themselves.

His side and leg hurt so badly he can't sit down. He's covered with one long bruise from his hip to his knee from falling backward.

But he has no plans to move somewhere closer to human aid and the human population.

Lately, when he has gone down to the Phoenix metro area out of necessity, he's been something of a celebrity.

The nurse who gave him his rabies shots just saw him on TV and wanted to hear his story. Then he had to tell it again to several people who recognized him when he stopped for lunch at the Village Inn.

Then he dropped by Fry's to pick up prescriptions, and - you guessed it - one of the pharmacy employees was telling two others Gruver's story right as he approached them.

State Veterinarian Elisabeth Lawaczeck attributes the record-breaking numbers to at least two factors: an increasing human population and the cyclical nature of rabies.

"Once you get a rabid animal like that, it just goes from animal to animal until it dies off," added Cecil Newell, environmental health unit manager with the Yavapai County Community Health Services Department. He advised hikers to carry a walking stick to fend off rabid animals.

"Rabies can be kind of a cyclical disease," agreed Zen Mocarski of the Arizona Game and Fish Department. "This year just happens to be the year for Yavapai County."

Despite the record year, the odds of encountering a rabid animal are extremely rare. Healthy wild animals generally run from humans.

Following is a recap of other rabid wildlife attacks on Yavapai County residents this year:

Ransom beat back the fox with his walking stick, while the female victim had to jog about a mile back to her vehicle with the fox's jaws latched onto her arm. That was a strange enough incident to get her a spot on the David Letterman show.

• A rabid bobcat attacked three people in Cottonwood in March, including two people in a crowded saloon.

The bar's video monitor produced footage that gained fame all over the Internet. It showed one man bending down to take pictures of the bobcat with his cell phone camera. Not surprisingly, the bobcat attacked him.

• A rabid bobcat attacked a family walking along a riparian trail in Prescott Valley in April. Lisa Montonati pulled the bobcat off her daughter and held it down by the neck as she tried to keep it away from her two daughters and their friend, who threw rocks at it and kicked it in an attempt to kill it.

That bobcat escaped but wildlife and police officials quickly tracked it down and killed it.

Montonati suffered severe injuries to her right arm and had to undergo weeks of physical therapy.