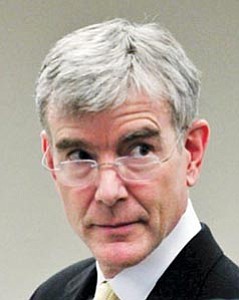 Defense lawyers for Steven DeMocker told a judge Thursday that they plan to ask that two separate juries be impaneled for the upcoming murder trial: one to determine guilt or innocence and the other, if needed, to decide whether to impose the death penalty.

DeMocker, 55, is charged with first-degree murder in the July 2, 2008, slaying of his ex-wife, Carol Kennedy, who was bludgeoned to death at her Williamson Valley home.

Larry Hammond, a Phoenix lawyer who represents DeMocker, said he based his argument for two juries partly on The Capital Jury Project, a study begun in 1991 that has polled more than 1,000 jurors from around the country who served on capital cases. It found that a majority of those jurors had already made up their minds about whether to impose the death penalty early in the trial, long before they were supposed to under the law.

"Well over half said if he was guilty he was going to get death before he was (convicted)," Hammond said.

Deputy County Attorney Joseph C. Butner III, who is prosecuting the case, contended that DeMocker should get the death penalty if convicted, citing five aggravating factors. Superior Court Judge Thomas B. Lindberg ruled earlier this month that three aggravating factors applied, including a burglary charge, cruel, heinous or depraved behavior and financial gain. Prosecutors allege that DeMocker killed Kennedy to free himself from $6,000-per-month alimony payments and to avoid splitting a 401(k) retirement plan with her in their divorce settlement.

DeMocker, who maintains his innocence, told detectives that he was riding his bicycle on a mountain trail when Kennedy died. Defense lawyers note that DNA from an unknown male was found underneath the victim's fingernails.

However, they sparred with Butner over his desire to continue testing items, including a swab from Kennedy's shirt. Defense lawyer John Sears said prosecutors have had the items in their possession since July 2008.

Lindberg allowed the DNA testing to continue, it "could be exculpatory."

"I've said many times we want DNA testing to be done," Hammond said later. But the closer to trial the harder it is for the defense to "ferret out what hasn't been done" and have its own experts examine the evidence.

Lindberg did not rule on a defense request to bring 450 potential jurors to the courthouse on different days and have them fill out a 17-page questionnaire. The questionnaire would determine if serving on a jury for the lengthy trial would be a hardship, what if anything they knew about the case and what their attitudes toward the death penalty might be.

Butner opposed the questionnaire, saying it was not needed.

Margaret Merlitz, a county jury commissioner, told the judge and lawyers that there is normally a pool of about 4,000 potential jurors available. About 100 jurors at a time fit into jury assembly rooms at either the courthouse in Prescott or the one in Camp Verde.

Defense lawyers propose calling in 450 potential jurors in early April in order to have a smaller group of "qualified" jurors to question orally when the trial begins on May 4.

DeMocker remains in custody in lieu of a $2.5 million bond.